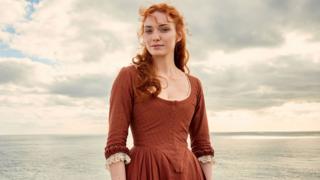 Poldark returns to BBC One this weekend, with Eleanor Tomlinson reprising her role as the fiery Demelza.

Yet the bodice-ripping Cornish drama isn't the only thing on the actress's plate. She is also set to release her debut album: A collection of "folk-ish" covers, according to her collaborator Anne Dudley. Who else has dabbled with a musical career?

Kiefer Sutherland is another actor who dabbles with music. The 24 star will be at Glastonbury this month, performing on the Field of Avalon alongside the likes of Sophie Ellis-Bextor.

Time will tell if there will be murder on the dance floor when he appears. Just for the record(s), here are 10 more celebrities who have tried their hand at making albums you might not have known about.

Known for his roles in such films as Footloose and Apollo 13, Kevin has also become a familiar face on UK TV screens of late thanks to his commercials for a certain mobile phone network.

But he has also released seven albums with his brother Michael that span folk, rock, soul and country - a fusion they have dubbed "Forosoco".

In an interview last year, Bacon admitted his celebrity status was useful to the band, saying it helped "get a few people in a few seats".

"The job is for those people to leave, and the next time we come through town they say, you know what, I saw these guys, they're actually pretty good."

Anyone who saw La La Land will know Ryan Gosling can carry a tune, even if he sometimes needs a bucket to do it.

If further proof is needed, though, look no further than Dead Man's Bones - a concept album he recorded with his friend Zach Shields in 2009.

Originally intended as the soundtrack to a play about monster who falls in love with a ghost, the score eventually appeared in the form of a suitably sepulchral-sounding record.

Werewolf Heart, My Body's a Zombie for You and Flowers Grow Out of My Grave were just some of the cheery tracks the duo subsequently performed on a Halloween tour.

Watch Gosling perform In The Room Where You Sleep with The Silverlake Conservatory Children's Choir.

Scarlett Johansson didn't take the easy route for her 2008 debut album, producing instead an album of moody Tom Waits covers.

"I was never looking to make a pop album," she said of Anywhere I Lay My Head at the time. "It's just not my cup of tea."

The Avengers actress went on to work with songwriter Pete Yorn on Break Up, an album of duets inspired by the ones that Serge Gainsbourg recorded with Brigitte Bardot.

Yet her later attempts to form a girl group called The Singles hit the buffers when another band with that name took her to court.

Watch the video for Scarlett's Tom Waits cover Falling Down.

Christie Brinkley famously appeared in the video for Billy Joel's Uptown Girl. Yet fellow supermodel Campbell went one better in 1994 by releasing an entire album.

Babywoman, alas, hardly set the world on fire and went on to be ranked sixth in Q magazine's 2006 list of the 50 worst albums ever.

That said, Naomi can lay claim to a top 40 single thanks to the one week her song Love and Tears spent in the top 40... in 40th place.

Her brief stint as a singer also saw her appear on Top of the Pops, where she was joined by two Indian dancers and introduced by Bruno Brookes.

Known to millions for his martial arts prowess, Chan is also an accomplished singer who has released more than 20 albums in five different languages.

He started off singing over the closing titles of his films and went on to release a string of albums, the first of which - 1984's Love Me - featured a song called Jackie's Legend.

In 2008 he made an official tie-in album for the Beijing Olympics. Seven years later, he recorded a song in aid of Beijing's bid to host the Winter Olympics in 2022.

He's also sung on screen, notably in 2002's The Tuxedo when he did a more than passable imitation of James Brown.

Between starring in hit films such as Muriel's Wedding, The Sixth Sense and Little Miss Sunshine, Australian actress Collette has also found time to make an album.

The result was Beautiful Awkward Pictures, released in 2006 under the name Toni Collette and The Finish - a band in which her husband, Dave Galafassi, played drums.

"I come from a long line of shower singers," she revealed that year. "I realised I could sing at age six or so, then I was weaned on musical theatre as a teenager."

Watch the video for the album's rather beautiful title track.

Like Collette, Downey Jr has released just one album to date - a 2004 release called The Futurist that featured eight self-penned compositions.

The results drew qualified praise from USA Today, which admired its "moody musicality" and "graceful folk and jazz flourishes".

"Clearly I have some hesitation in being an actor who puts out an album," Downey Jr admitted at the time. "But after years of writing songs, it gradually became more real."

Watch him perform Man Like Me, the album's opening track.

Clint's ties to music extend from him singing on screen in 1969's Paint Your Wagon to composing the scores for such films as Mystic River and Million Dollar Baby.

Few know, though, that he released an album in 1963 entitled Rawhide's Clint Eastwood Sings Cowboy Favourites.

According to Cameo Records, the disc saw Eastwood present "an exciting song picture of the west... with an intimacy and style that marks him as a true show business great".

From Count Dracula to Saruman in The Lord of the Rings, Sir Christopher Lee created some of the silver screen's most memorable and menacing villains.

But towards the end of his life, he found the time to release a pair of heavy metal concept albums about King Charlesmagne, the first Holy Roman Emperor.

"If it's properly done and you can understand the story and what people are singing... I think it's rather exciting," he told the BBC in 2012.

Sir Christopher's other endeavours included a series of Christmas covers that include this head-banging version of The Little Drummer Boy.

The Oscar-winning star of GoodFellas and Home Alone was a childhood friend of Frankie Valli and played a small but pivotal role in the formation of The Four Seasons.

He released his first record in 1968, an album of covers called Little Joe Sure Can Sing! that included his version of Got To Get You Into My Life by The Beatles.

Vincent LaGuardia Gambini Sings Just for You, Pesci's belated second album, was a different beast altogether that saw him sing as the character he played in 1992's My Cousin Vinny.

Ireland's Hot Press magazine gave a withering critique of this 1998 effort, predicting Pesci would not "be troubling George Michael in the best male vocal Grammy stakes".

Chelsea Manning thanks Obama in first interview
17 Cats and Dogs Who Cannot Do Without Their Human...