6 things you might not have known about Jane Austen 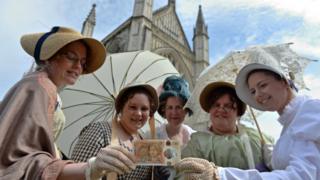 Image copyright Reuters Image caption The new £10 note is the first Bank of England note to include a tactile feature to help visually impaired people.

It is 200 years since the death of Jane Austen and while the author is known as one of the world's greatest writers and has had her portrait unveiled on the new £10 note it was not always that way.

Historian Lucy Worsley, who has written a new biography of the novelist, tells us six significant things about the author.

She never got her due in her lifetime...

"I feel still a sense of injustice about the way she never got her due within her lifetime.

"Her names were not on the covers of her books, she published anonymously, she did not seek fame and fortune and she's buried in Winchester Cathedral under this grave that doesn't even mention her books.

"It still makes me so cross. I still feel the need to tell people about this and try to put that wrong right.

"It's brilliant the Times has published her obituary today 200 years later. Good for them. 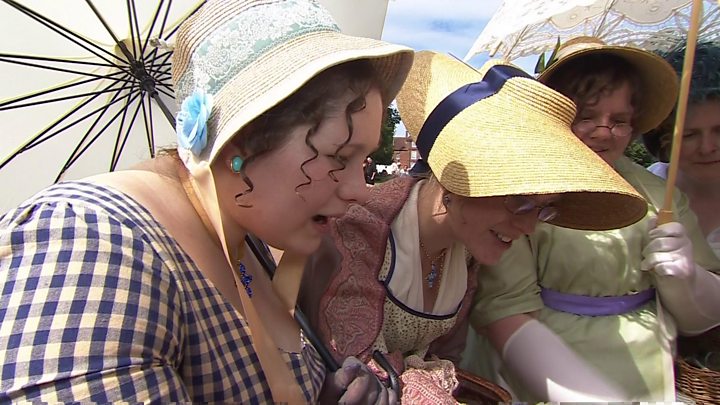 "They didn't write it at the time because nobody knew her name when she died, nobody cared who she was.

"That's why the Bank of England have struggled with the issue of getting an image of her for the new £10 banknotes.

Her novels were too novel...

"Part of the problem with her books was that they literally were novel.

"It was a new kind of highly realistic social satire and it took people ages to see that was a thing but after she died they [the books] did go like a rocket."

She is still relevant today...

"I think she still has messages for us today because that underneath all the surface glamour and elegance of her writing, there's an undercurrent which is the message of 'look how rubbish Georgian society is for the heroines of these novels.'

"Look how rubbish it is that they're put into the position where they believe they have to marry for money.

"It's not the case that we're in the same situation now exactly but it still resonates, and there are still messages there that echo with me."

"And young women today, we're told we have personal freedom and we don't.

"We will come up against rules, restrictions, rules and rigidities of our own and Jane Austen gives you the courage to challenge those things, in my belief."

Every generation needs to create their own Jane Austen...

"The Victorians thought of her as a good little woman, they called her Saint Aunt Jane, they liked to think of her producing these books with no apparent effort at all.

"But then someone like me comes along in 2017 and I don't see that at all. I see somebody who was ambitious, who wanted professional success, who actually wanted to earn money and who took some choices that were admirable.

"I don't think she was just an important writer, clearly she is that - I think she's also an important human being, a role model."

"I think one of the key moments in her life was when she got a really significant marriage offer - he was a man with a wonderful mansion and he would have given her financial security for the rest of her life.

"She did accept this guy but the next morning she broke it off and that was such a huge risk for her to take as a Georgian genteel woman, and I think she took that risk because she had just sold her first novel.

Jane Austen and the alt-right...

"In the same way as Shakespeare, she's a great artist, and when you've got a great artist you can take what you want to take from their art. I look at her and I find a feminist but that's not the only reading of her life by any means.

"There are people in America on the alt-right who read her as a deeply conservative writer and she does talk a lot about the importance of the correct ordering of society, and she's very down on the nouveaux riches and she's interested in the good stewardship of land."

If you want to delve into the world of the alt-right and Jane Austen, Nicole M Wright, an assistant professor of English at the University of Colorado, has written about it in The Chronicle.

She didn't live in a grand home...

"At first sight, she looks like she's utterly part of the establishment but I don't think that she was and it's that sense of her being a bit of a radical, a bit of an outsider and a bit of an agent of change that I want to celebrate.

"Anyone who's seen a film of a Jane Austen novel could well come away with the idea that she lived in a lovely, great big country house like Pemberley - but she didn't at all by any means.

"She was from a bit lower down in society and if she ever was in a grand country house it was as the poor relation - someone who was tolerated, someone who was an outsider and that's a terrific position for a novelist to be in.

"Somebody who's a bit outside of things looking in - those are the ones who can see what's wrong with a society or a situation and it gives hope to anyone like me who's a bit shy, a bit geeky, a bit feeling outside the mainstream of things.

Lucy Worsley's biography is entitled Jane Austen At Home - she has also presented a programme Jane Austen Behind Closed Doors for the BBC exploring the different houses in which Jane Austen lived and stayed.

The Duchess of Cambridge Reportedly Joked About Ha...
10 Stories Everyone With a Bestie Will Appreciate