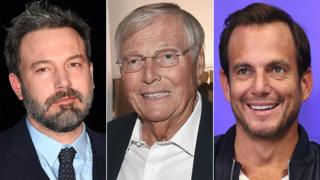 Ben Affleck and Will Arnett have joined fellow Batman star Val Kilmer in paying tribute to Adam West, who played the superhero on TV in the 1960s.

Affleck said the late actor, who died last week aged 88, had "exemplified heroism" and remembered him as "kind, funny and an all around great guy".

"Thank you for showing us all how it's done," said the star of last year's Batman v Superman: Dawn of Justice.

"RIP Adam West," wrote Will Arnett on Twitter. "You will always be Batman".

Arnett voiced the Caped Crusader in 2014's The Lego Movie and this year's The Lego Batman Movie.

Kilmer, who played Batman in 1995 film Batman Forever, remembered West on Saturday as "a real gent".

"He was always so kind when we met," said the actor, referring to his predecessor as "dear Adam West".

Kevin Conroy, who voiced the Caped Crusader in Batman: The Animated Series, also paid homage to "the Batman of his childhood".

"He brought us so much entertainment and was a truly class act," he wrote on Twitter.

His sentiments were echoed by fellow voice actor Will Friedle, who voiced the Dark Knight in 2000 animation Batman Beyond: Return of the Joker.

"Thank you Batman for keeping us all safe," he wrote on Twitter.

Others to have paid tribute include Mark Hamill, who voiced The Joker in Batman: The Animated Series.

"#AdamWest was such a wonderful actor & so kind," wrote the Star Wars actor on Twitter.

"I'm so lucky to have worked w/ him & tell him how much he meant to me & millions of fans."

Burt Ward, who played West's Robin in the cult 1960s TV series, remembered him over the weekend as "a great father, a great family man [and] a wonderful human being".

"I'm going to miss him incredibly," he told BBC Radio 5 Live. "It's very difficult to really believe that the end has come."

West died on Friday after a "short but brave battle" with leukaemia, according to a family spokesperson.

Best known for his tongue-in-cheek portrayal of Batman and the superhero's alter ego Bruce Wayne, he also had a recurring role on animated series Family Guy.

In a message posted on the actor's Twitter feed, West's family said they were "so grateful for the outpouring of love from AW's fans, friends, colleagues and the media."

Affleck will again be seen as Batman later this year in Justice League, in which Gal Gadot will also appear as Wonder Woman.