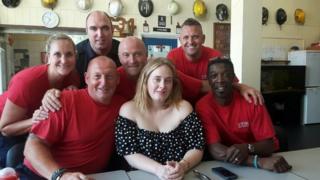 Pop star Adele has paid an unexpected visit to some of the firefighters who tackled the Grenfell Tower blaze in west London last week.

Her surprise appearance was documented by fireman Rob Petty at Chelsea fire station.

Station manager Ben King said: "She just turned up at the station and knocked on the window and said she has some cakes for us.

"So we opened the door to her and then she took her sunglasses off and said: 'Hi, I'm Adele'. Everyone was so shocked.

"She came in, came up to the mess and had a cup of tea with the watch and then she joined us for the minute's silence.

"We have had so much support for the local community and we cannot thank everyone enough."

Image copyright London Fire Brigade Image caption Adele is among many people, famous and not, who have shown support for victims and fire crews

It's not the first time Adele has shown her support for those affected by the blaze which engulfed the tower block in the early hours of last Wednesday.

The singer was spotted comforting locals at a vigil for the victims a day after the fire in which 79 people are now missing presumed dead.

Other high-profile figures have also offered help and support including chef Jamie Oliver, singer Lily Allen, and actor Tom Hardy who started a crowdfunding page to raise money for victims.

Meanwhile, other people have been showing their support for the fire crews through The Fire Fighters Charity.