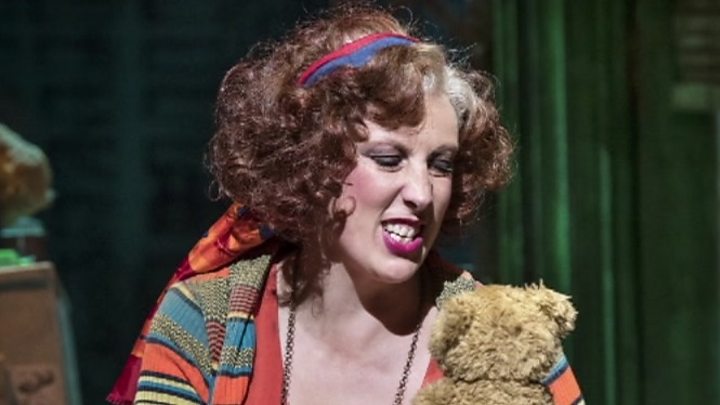 Fans of Miranda Hart's clownish TV persona won't be disappointed with her stage performance as the child-hating Miss Hannigan in Annie.

The comedian and actress did her trademark gallop during the curtain call at the musical's opening night at London's Piccadilly Theatre.

Speaking to the BBC after the show, Miranda said she felt "exhilarated" to be making her West End debut as the "big and brash and clowny" orphanage owner.

"Despite being grotesque and a drunk and vile, she's also vulnerable and very funny, so it was hard not to bring some of my humour to it," she said.

"There's always going to be a bit of me in the performance - and obviously I had to gallop at the end. That was essential!"

The reviews have been largely positive, with The Telegraph saying the role of Miss Hannigan takes Miranda "outside her plummy-pleasant comfort-zone".

"Half gorgon, half goofball, all round pleasure, she daftly-deftly combines menace with physical comedy," Dominic Cavendish wrote in his four-star review.

The Guardian's Michael Billington was less convinced in his three-star-review.

"She works hard and sings and dances capably, but it's difficult to accept her as an accomplice, as the role demands, to abduction and possible murder," he said. "Hart, I suspect, has too much heart."

Set in 1930s New York during the Great Depression, Annie tells the story of an 11-year-old girl who wants to escape from a life of misery at Miss Hannigan's orphanage and find her parents.

Her luck changes when she is taken to spend Christmas at the home of billionaire Oliver Warbucks, but Miss Hannigan hatches a plan to spoil Annie's happiness and her search for her real parents.

The musical includes the songs It's A Hard Knock Life, Tomorrow and Easy Street.

In Monday's show Annie was played by 12-year-old Ruby Stokes, who shares the role with Madeleine Haynes, 13, and Lola Moxom, 12. They all get to play opposite the scene-stealing Amber, a Labradoodle who plays Annie's dog Sandy.

Some reviews have pointed out the West End musical's unashamed optimism is just what London needs after the recent terror attacks.

Alex Bourne, who plays Warbucks, said: "Whatever happens in the world, or in our country, people still come to the theatre.

"I remember 10 years ago when there were the 7/7 bombings and I was in a show in London we all thought people wouldn't come, but they came more because people need cheering up in those times."

Miranda added: "It's part of why we do it. We remember being Ruby's age and sitting in that magical place in the theatre and being awestruck by musicals in the way that you are at that age."

Read the full reviews in The Guardian, The Telegraph, The Mail, The Stage, Whatsonstage and the Evening Standard.

Annie is at the Piccadilly Theatre, London, until 6 January 2018.

Trump Jr to London: 'Keep calm and actually do som...
12 Bizarre Things You Need to Know About China