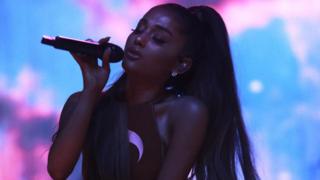 Ariana Grande has resumed her tour, just over two weeks after the terrorist attack at her Manchester Arena concert.

Twenty-two people were killed and 116 injured in a suicide bombing after her gig on 22 May.

"First show back tonight. Thinking of our angels every step of the way. I love you with all my heart," the singer wrote on Instagram.

"Grateful for and incredibly proud of my band, dancers and entire crew. I love you I love you."

Security was tight at the show, with some fans uploading videos of themselves being searched as they went in.

French police had announced prior to the gig that security would be heightened because of the show's "powerful symbolic context".

Roads surrounding the venue were blocked off to traffic hours before the event started. Security staff searched all bags and police with sniffer dogs patrolled the venue.

Wednesday evening's show at the AccorHotels Arena in Paris marked her first full-length solo show since the attack and the resumption of her tour.

But her first live performance was on Sunday, when she appeared at One Love Manchester, a benefit concert to raise money for the victims of the suicide bombing and their families.

Grande had suspended her Dangerous Woman tour after the Manchester attack - cancelling dates that had been scheduled in London, Poland, Germany and Switzerland.

Resuming her tour on Wednesday, the singer rattled through hits including Side To Side, Bang Bang, Into You and Problem.

She also added Somewhere Over the Rainbow to her usual set list - a song she performed at the end of the benefit concert in Manchester in honour of the victims.

On the morning of 23 May, BBC Radio 4's Today programme was filled with wall-to-wall coverage of the Manchester attack as accounts of what had happened the night before streamed in.

Early in the programme, the presenters confessed they hadn't previously heard of Ariana Grande - perhaps unsurprising given the lack of overlap between her target audience and Today's.

But less than two weeks later, a peak of 14.5 million people in the UK alone were tuning in to watch her close One Love Manchester with live renditions of One Last Time and Somewhere Over the Rainbow.

It was the highest TV audience of the year so far and broke iPlayer records for the most watched live non-sporting event ever.

As the concert drew to a close, it was hard to find anyone who wasn't praising Ariana for how she had handled the aftermath of the atrocity.

The singer visited fans in hospital. She organised the concert (admittedly with a great deal of help) and released a single to benefit the victims. All in all, she helped raise more than £10m for the Red Cross's Manchester Emergency Fund.

It's easy to assume young pop stars are bubble-wrapped and have all their decisions made for them. Which many are and do.

But few could dispute the grace with which Ariana took control and handled the aftermath of such a horrible event.

Nobody would have blamed her had she needed to take some time out after experiencing something so traumatic.

Having to process the grief of a terrorist attack happening on one of your tour dates is something many wouldn't even be able to begin to get their heads around.

But, as her manager Scooter Braun said at the benefit gig, Ariana recognised the importance of carrying on in an act of defiance and unity.

"Hatred will never win, fear will never divide us, because on this day we all stood with Manchester," he said.

Grande was praised from all quarters after One Love Manchester.

Ellie Goulding called her a "legend" while Pixie Lott said she was "a true angel".

Even Piers Morgan, who had previously criticised her for flying back to the US immediately after the attack, was won over.

Ariana herself told of how she'd met with the mother of Olivia Campbell-Hardy, one of the victims, who told her to stop crying because her daughter wouldn't have wanted it.

Instead, she encouraged Ariana to get up on stage and simply play the hits. And that's precisely what she did.

The singer now has a certain bond with the city of Manchester, and the affection she expressed to the city at the concert was mutual.

Ariana has live dates scheduled in Portugal, Spain and Italy later this month, before she moves on to the South American leg of her tour.

It's likely that no matter wherever she goes now, geographically or professionally, she'll be greeted with a new-found respect for how she dealt with such an unspeakable tragedy.