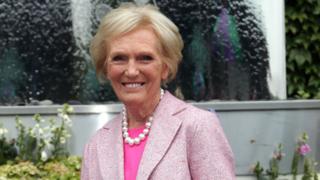 The BBC has announced a new TV cookery competition - with Mary Berry as the lead judge.

Britain's Best Cook will be broadcast on BBC One and presented by Claudia Winkleman.

The BBC said 10 contestants will compete across eight episodes, serving meals that reflect both the modern and classic dishes of British home cooking.

Berry said: "I am never more at home than when I have my judging hat on."

She continued: "This series is going to encourage proper home cooking, which I have always championed and I cannot wait to start. Claudia, for me, is the icing on the cake."

The 82-year-old will be joined by a second judge - but their identity hasn't yet been revealed.

Winkleman said: "I am over the moon to be part of this show. Am slightly obsessed with Mary so will follow her around with my own moussaka for most of the filming. Apologies in advance."

The BBC announcement said contestants will have to prove they have the "skills and repertoire, technical ability, resourcefulness and creativity" to be crowned Britain's Best Cook.

Berry left The Great British Bake Off last year, when it was announced that the programme would move from the BBC to Channel 4.

This won't be Berry's first show for the BBC since leaving Bake Off.

It has been announced she will appear in Mary Berry's Secrets From Britain's Great Houses, and she has also fronted Mary Berry Everyday for BBC Two.