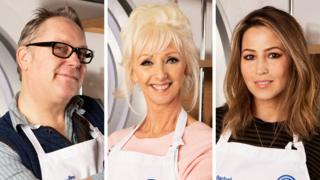 S Club 7's Rachel Stevens, comedian Vic Reeves and Paul Daniels' widow Debbie McGee are among the personalities who will feel the heat of the Celebrity Masterchef kitchen in the next series.

They will don the Celebrity MasterChef apron for series 12 in August.

They will compete in groups of five in heats, facing tests like the Mystery Box Challenge and the Mass Catering Challenge, before semi-finals and the final.

Did Goldie just reveal who Banksy is?
20 Awesome Stories About First Dates from Masters ...