Comic-Con: Which fans are 'crazier' - Star Wars or Game of Thrones? 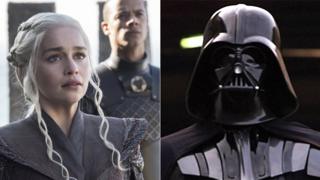 Members of any fandom are passionate, but Game of Thrones and Star Wars actress Gwendoline Christie was put in an awkward position when she was asked which of her fan bases was "crazier".

During the Game of Thrones panel at Comic-Con, a fan asked Christie - who plays Brienne of Tarth in the fantasy drama and Captain Phasma in the latest Star Wars films - who was more passionate.

"It's not really a craziness, but the level of passion is pretty much equal," she said.

"What is noticeable is that Star Wars is something many of us grew up with, which gives many of us a sense of hope. That's how I feel - like I came home.

"With Game of Thrones, we're going into season seven now, and there's a similar feeling. I hope that Game of Thrones lives on so people have that same feeling of home and love for it."

And fans were delighted it was hosted by Kristian Nairn, who starred as Hodor until season six.

However, since season seven began this week, the cast members were tight-lipped - not giving much away and talking mainly around their characters.

Alfie Allen decided to bring his puppy to Comic-Con, which was well behaved during the hour-long panel.

It's Hodor! And he speaks in full sentences!

Sophie Turner received a brief boo from the crowd when she said she wished she could bring back the evil Joffrey to the show, but only because she enjoyed working with Jack Gleeson who played him.

Liam Cunningham joked that a Game of Thrones spin-off show was in the works called Better Call Davos.

When asked what new laws they'd make in Westeros if they were on the throne, Nathalie Emmanuel said she'd give education for everyone and John Bradley (above centre) wanted Maesters to clean up "their own stinking" waste.

Isaac Hempstead-Wright wanted a warm holiday scene for all the characters who usually film in cold places. Which is fair enough - winter has been coming for a while.

A teaser clip of what's to come in episode two this coming week was also shown to the crowd and released by HBO shortly after.