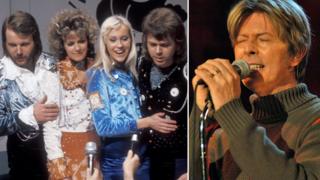 Venues and studios used by Abba and David Bowie will be decorated with a blue plaque on Thursday. David Bowie, John Peel and Sandy Denny will all receive blue plaques in their honour, thanks to nominations made by BBC local radio listeners.

Forty-seven plaques will be unveiled on BBC Music Day this Thursday, recognising pioneering musicians and music venues around the UK.

Motorhead star Lemmy will be celebrated at Port Vale FC, which has adopted Ace Of Spades as its unofficial anthem.

Superstar tenor Alfie Boe will also receive an award in his hometown.

His plaque will be unveiled at Marine Hall in Fleetwood, where the musician gave his first public performance at the age of 14.

"I can't believe that this is happening," he told the BBC.

"You walk past so many blue plaques on buildings and you never suspect you're going to be one of them. I'm just blown away by it, I really am."

Billy Bragg will unveil a plaque for David Bowie at the site of the Trident Studios in Soho, where the star recorded his multi-million selling albums Hunky Dory and The Rise and Fall of Ziggy Stardust.

Bowie's backing band The Spiders From Mars will also be commemorated at Hull's Paragon Station - from where they took the train to meet the Thin White Duke in the 1970s.

Other notable honourees include:

Sir Neville Marriner: World-renowned conductor and founder of the Academy of St Martin in the Fields, honoured at his birthplace in Lincolnshire Delia Derbyshire: Electronic music pioneer who co-created the Dr Who theme song, memorialised at her childhood home in Coventry The Brighton Dome, Brighton: Site of ABBA's victory in the 1974 Eurovision Song Contest John Bonham: Drummer for Led Zeppelin, honoured at his childhood home in Redditch Grimethorpe Colliery Band: Brass band whose story inspired the film Brassed Off, recognised on the centenary of their formation The Mayfair Ballroom, Newcastle: Where the band who became Led Zeppelin made their live debut Nick Drake: One of the most influential voices in folk-rock, commemorated in Far Leys, where he died aged 26 John Peel: Broadcasting legend and tireless champion of new music, honoured at his local village hall Byfield Village Hall, Northampton: Site of folk singer Sandy Denny's final gig in 1978

Image caption Boe says he is "blown away" by the honour

Congratulations on being awarded a blue plaque. How does it feel?

I really can't get over it. It's an amazing thing to happen to me, and I'm not taking it lightly. I'm very, very, very honoured.

The plaque will be nailed to the wall of Marine Hall, where you played your first gig. What do you remember of that night?

I was a 14-year-old kid and I was very scared, very nervous. We were doing something called Songs from the Shows, and I was asked to sing Bring Him Home from Les Miserables. I never would have thought that, years later, that would have been a role I would have played on Broadway and in the West End.

Have you been back to the venue since?

I've played there a number of times. It's a place that I hold very close to my heart. It's a little gem of a theatre.

I even worked there as stage crew and then in the waiting staff for all the banquets and balls they used to have.

I bet they're not putting that on the plaque.

Who are you bringing to the unveiling ceremony?

Obviously my family will be there and lots of old friends from Fleetwood. I think Michael [Ball] is coming and joining me on the day, as well. I can't thank him enough for taking time out and spending the day in my hometown. I'll show him around and we'll get a bag of chips on the seafront.

And when the event's over, you can stack the chairs.

Exactly. Stack the chairs and mop the floor, just like old times.

BBC Music Day is an annual celebration that aims "to unite communities and generations through their love of music".

More than 200 events will take place this Thursday, including a co-ordinated, country-wide bell-ringing performance at 19:00 BST.

Schoolchildren in Bradford and Portsmouth will attempt to break world records in drumming and Tamboo Bamboo, while the indie band The Courteeners will visit Manchester Royal Infirmary to explore the impact of music therapy on patients.

BBC Radio 3 will broadcast five dramatic monologues by new writers about the power of classical music, performed by actors including Liam Neeson and Julie Hesmondhalgh.

And The Charlatans will play an exclusive concert for BBC Radio Scotland and BBC 6 Music.

The blue plaques were awarded by BBC Local Radio and the British Plaque Trust, after audiences were invited to nominate worthy artists earlier this year. 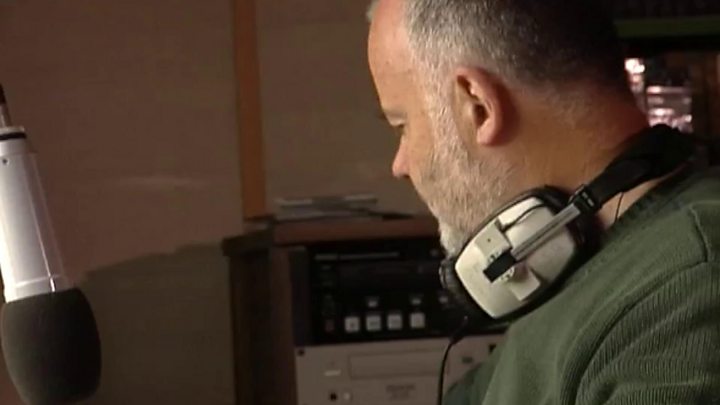