Did Goldie just reveal who Banksy is? 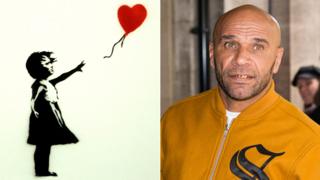 Goldie referred only to a man named "Rob" during the chat. There are more rumours about the identity of Banksy, after Goldie appeared to reveal who he is in an interview.

The DJ referred to a man called Rob in a chat about the elusive graffiti artist on the Distraction Pieces podcast.

But Goldie didn't elaborate beyond the first name and there was no follow-up question from presenter Scroobius Pip.

There are two possible figures who have been linked to Banksy in the past, who the DJ could have been referring to.

His name has come up in connection with the Bristol street artist - a Scottish journalist linked him to being Banksy in an investigation last year.

Other reports have claimed that Banksy is a collective group of artists headed by Del Naja.

Another possible candidate is Robin Gunningham.

A Mail On Sunday report "revealed" him to be the man behind Banksy in 2008.

A pro-EU artwork by Banksy appeared in Dover recently

The report said Gunningham was from a comfortable, middle-class background and was privately educated at Bristol Cathedral School.

Goldie told Scroobius Pip: "For something like graffiti, which has inspired the world with font or anything to do with anyone wearing a baseball cap and sneakers, at its centre it is still misunderstood.

"But give me a bubble letter and put it on a T-shirt and write Banksy on it and we're sorted… We can sell it now.

"No disrespect to Rob, I think he is a brilliant artist. I think he has flipped the world of art over."

There have also been reports that Banksy's real name is Robin Banks - but this may have been one of Gunningham's street nicknames.

We may never know for sure, but Goldie's slip of the tongue will likely reignite the rumour mill.

RuPaul to get star on Hollywood walk of fame along...
Celebrity Masterchef 2017 serves up Rachel Stevens...