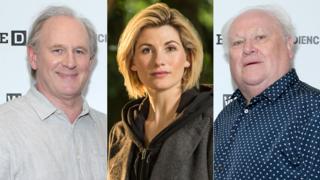 Two ex-Time Lords have had a war of words over Jodie Whittaker being cast as TV's first female Doctor.

Peter Davison, who played the Doctor from 1981 to 1984, said he "liked the idea" of a male Doctor and that he felt "a bit sad" the character might no longer be "a role model for boys".

His comments were promptly dubbed "rubbish" by his successor Colin Baker.

"Can't you be a role model as people?"

The actors were speaking on Thursday at Comic-Con, the world's largest celebration of film, TV and pop culture.

Baker, the father of four daughters, said the BBC show's 54-year history had given young male viewers plenty of figures to emulate.

"They've had 50 years of having a role model," said the 74-year-old. "So sorry Peter, you're talking rubbish there - absolute rubbish."

Davison - whose own daughter Georgina is married to David Tennant, another ex-Doctor - accepted "you need to open it up" and that he was "maybe an old-fashioned dinosaur".

The news that Whittaker will inherit the Tardis from Peter Capaldi this Christmas has been a major talking point at the San Diego event.

John Barrowman asked fans to give the Broadchurch actress a chance while making his own Comic-Con appearance on Thursday.

"If we buy into the world of Doctor Who... it doesn't say that he will be a he all the time," said the actor.

Barrowman, who played Captain Jack Harkness in the programme and its spin-off Torchwood, donned a glittery mini-dress modelled on the Tardis while appearing at the San Diego Convention Centre.

Closer to home, Whittaker's casting as the 13th Doctor continues to animate other former stars of the long-running series.

Freema Agyeman, another former companion of the TV time-traveller, said she was "overjoyed" that a woman had finally landed the role.

"I feel like standing on top of a rooftop and shouting for joy," said the actress, who confessed to being "astounded" by the "furore" that the casting announcement had generated.

"The strength of the show and the reason for its longevity is the way it keeps changing and shifting," she told the BBC this week.

Agyeman, who played Martha Jones opposite Tennant's Doctor, will shortly be seen in Apologia at London's Trafalgar Studios alongside The West Wing's Stockard Channing.

Earlier this week it was revealed in the BBC's annual report that Capaldi was paid between £200,000 and £250,000 last year for his role in the series.

In an interview with the London Evening Standard, BBC director general Tony Hall said Whittaker would be paid the same as her predecessor "for the same amount of work".