A Dutch wedding photographer shot an album last month that may have to come in a plain brown wrapper.

Photographer Michel Klooster told HuffPost that the couple got married on Aug. 17 in Leeuwarden, Netherlands. He says they decided to add some spice to the typical wedding photos.

For one image, the couple posed as if they were having sex in a maroon pickup truck.

Then they took another picture that can only be described as “blue.” In the photo, the bride appears to be performing oral sex on her new hubby. 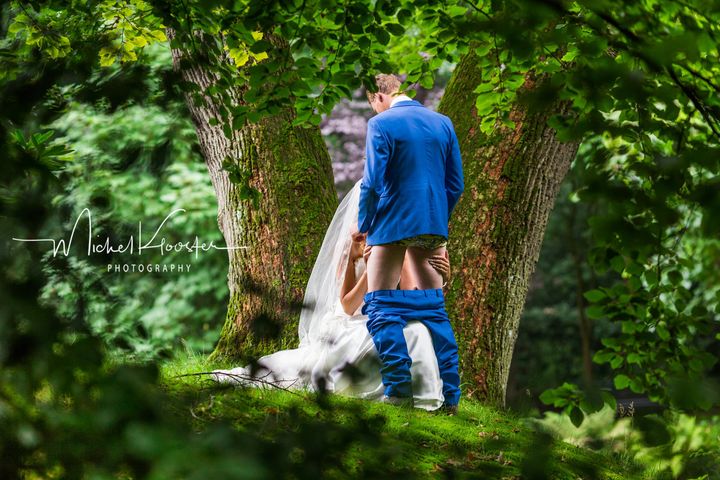 Klooster told HuffPost that the bride’s mother suggested that photo to him.

“We were taking photos and she [told] me that they wanted that kind of picture, but the bride and groom didn’t dare ask me,” he said in a Facebook message. “Then I just said, ‘Of course, we are gonna do it.’ So I suggested where they need to stand for the right vibe!”

He said once the couple was in the right spot, it only took a minute to get just the right picture.

Maybe not surprisingly, the couple has asked not to be identified out of shyness, Klooster says. Though the photos don’t identify the couple, the photographer showed HuffPost other wedding photos from the shoot on the condition they not be published.

Still, ever since Klooster posted the pics on Facebook on October 2, they’ve gone viral, receiving 33,000 Facebook reactions as of Thursday evening.

Klooster admits some people have been offended by the cheeky wedding pics, a reaction that surprises him.

“You see nothing in this picture, but it looks like something is going on there,” he said. “Every picture you’ll take with that kind of question is interesting to watch. For me, sex is one of the most natural things we do in life. It’s normal! Everyone does it. We don’t live in the 1900s anymore.”

Klooster said he thinks “there are bigger problems in the world than this funny picture,” but he may be getting the last laugh.

Since the photos went viral, he’s had requests from other couples who want similar shoots.