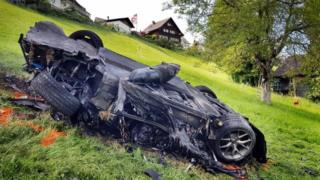 Former Top Gear host Richard Hammond has been flown to hospital after a crash while filming in Switzerland.

The 47-year-old was on a practice run for a race in an electric car for Amazon Prime show The Grand Tour.

Mr Hammond "climbed out of the car himself before the vehicle burst into flames", the show said in a statement.

Co-host Jeremy Clarkson tweeted that it was the "most frightening" accident he had ever seen but said Mr Hammond, who fractured a knee, was "mostly OK".

The show's statement said Mr Hammond had been involved in a "serious crash" after completing the Hemberg Hill Climb in Switzerland, where a race takes place on Sunday.

He had been driving a "Rimac Concept One, an electric super car built in Croatia, during filming for The Grand Tour Season 2 on Amazon Prime, but very fortunately suffered no serious injury".

Mr Hammond was "conscious and talking" after the crash, the show said, and had been flown to hospital in St Gallen "to be checked over".

"Nobody else was in the car or involved in the accident, and we'd like to thank the paramedics on site for their swift response.

"The cause of the crash is unknown and is being investigated," the statement added.

The Hemburg organisers said the official race would take place as planned on Sunday.

A statement said: "The vehicle left the track and landed in the meadow."

They added that rescuers had been "very fast" to reach the scene.

The crash comes 11 years after Mr Hammond nearly died when he lost control of a Vampire dragster while filming for Top Gear.

He was in a coma for two weeks after the accident at Elvington Airfield, near York.

Mr Hammond, who had been driving at speeds of up to 288mph (463km/h), suffered brain injuries but made a full recovery.

A "catastrophic disintegration" of the jet car's front tyre, probably caused by an object like a nail, caused the crash, a BBC report later concluded.

In early March 2017, Mr Hammond said he had fallen off a motorbike "many times" while filming an episode of The Grand Tour in Mozambique and "banged my head".

But he also said he was "fine", although Mr Clarkson told the Sun newspaper that Mr Hammond had "hurt himself quite badly".

Inside the underground Nazi 'village'
100 Ultimate Beauty Secrets That Stand the Test of...

London Sewer Overwhelmed By Gigantic 'Fatberg'
Photos
One of the biggest “fatbergs” ever seen in Britain - a ball of fat as long as three soccer pitches - has been found blocking a Victorian-era, east London sewer. “It’s a total monster and taking a lot ...
2681 hits
Read More Polygamous husband shows off lovely wives, thanks God for happy union
Photos
A picture posted on Facebook by a man named Agusi Oyeintari showed him happily sandwiched between his wives. A polygamous man, Agusi Oyeintari, cut the reflection of a fulfilled man following a pictur...
1913 hits
Read More

The burning question*: Are Penguins chocolate bars or biscuits?
Photos
It’s Monday, so let TheJournal.ie distract you from the ‘serious’ news with one of life’s REAL dilemmas. (*not really)
2094 hits
Read More

Man locked inside a supermarket for a night eats $8,000 worth of food
Photos
47-year old Liam Norris claims he had to use the store’s bathroom a few minutes before closing time and incidentally escaped the notice of the employees closing up shop for the night. Once he cam...
4483 hits
Read More