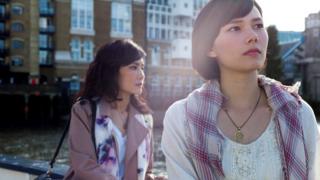 In 2009, a Chinese woman called Anna killed herself near London's Heathrow Airport. Her friends later learned that she had been working as a prostitute in an illegal massage parlour.

One of those friends, Jenny Lu, a Taiwanese art school graduate, began a journey to find out about her secret life.

It resulted in Lu's first feature film, The Receptionist, which premieres in Taiwan on Friday and at the Edinburgh Film Festival in the UK next week.

Some readers may find aspects of this story upsetting.

"I met Anna in Chinatown at a dinner gathering. She looked really normal," recalls director Lu.

"She came from a little village in China. She went to London because she wanted a better life. But she ended up living a double life that no-one knew about.

"I felt really sad. How come no-one knew about this and no-one was able to help?"

Through a mutual friend, Lu tracked down women who had worked with Anna at a massage parlour.

They were immigrants from mainland China, Malaysia, the Philippines and Thailand. Other parlours employed women from well-off economies including Hong Kong, Taiwan, Korea or Japan.

Like some of the women, Anna arrived in the UK on a fake marriage.

"She was married to a British guy but he didn't have a job. Anna's family had paid a lot of money to arrange this fake marriage for her. She worked really hard to try to pay back the debt and to support her brother in China," Ms Lu explains.

Other women came here on fake passports. Some were divorced and wanted to start a new life in the UK. Some wanted to earn money to support their children.

Others, including those from Taiwan, were language students enticed by money.

After arriving in the UK, many realised it was much harder than they had expected to survive, not to mention achieve their dream, so they resorted to working at the massage parlours, Lu said.

The Receptionist is based on the lives of the employees and clients at a massage parlour in London, as seen through the eyes of a Taiwanese graduate employed as a receptionist there.

It unabashedly portrays the treatment the women endure, including being subjected to abuse and extreme fetishes.

Gangsters demanded "protection" money from the women, and would beat, rob and rape them if they didn't pay up, knowing they wouldn't dare call the police.

Image copyright Mirror Stage Films Image caption The women are abused, beaten and raped by the criminals 'protecting' them

Though the scenes in the film are fictionalised, they are all based on the experiences of Anna and her colleagues.

"The actors initially didn't believe the script. So I arranged for them to meet the women," she tells.

While some women eventually quit, many stayed even though they were not forced to, and even after they had made some money. Not fluent in English, they worried they would have a hard time finding a well-paid job.

"They always say they want to leave after a year or a few months… but they get used to making quick money," Ms Lu says.

"They don't want to choose other jobs where they can't earn as much. They think: 'How can I afford to keep living if I don't do this?'"

"It's a dangerous mindset. It's like a hole they dig for themselves. So many people can't get out."

The women rarely went out because they feared the neighbours would find out. They worked day and night. Their curtains were always drawn.

"What surprised me was that many of the women had never actually seen any London landmarks," said Lu.

Many were the pride of their family when they went abroad. They were ashamed to go home or tell their family the truth.

Some try to forget their past and the normal life they used to have.

"It's like a person with no soul. They don't want to think too much," Lu explains.

Image copyright Mirror Stage Films Image caption Tina, the receptionist, hides her job from her boyfriend - but he later finds out

Anna was 35 years old when she killed herself. She had only been in the UK for two years and had been working in the sex industry for about a year.

"Some of her friends think she got pressured because her family kept asking for money," the director says. "Others thought she couldn't accept the job she was doing, so every day was a struggle."

"And a friend had borrowed money from her to open a restaurant. When she asked for the money back, that friend threatened to tell her family what she did for a living. She was panicky."

"She thought about her family a lot; she hadn't really wanted to go abroad."

This was very different from Lu's own life - her family was able to support her studies, enabling her to pursue her goal of becoming a filmmaker.

"It was a shock for me because previously, I had never had the opportunity to meet people like that," the director says.

Despite a low budget - £300,000 mostly from two Taiwanese government subsidies and a little raised from Kickstarter - Lu's film has been selected for screening in the Edinburgh International Film Festival, and has been nominated by the Milan International Film Awards and Taiwan's Golden Horse Awards.

"The message I want to send is even if you've walked far and chased your dream for so long, turn back and look at where you came from, what your initial dream was. Many people forget."

Lu plans to show the women the film when she returns to the UK, so they will see that she has told Anna's story.