Five stand out moments of Love Island so far 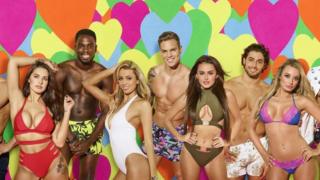 Whether you're out for a cuppa with your mum, in a Whatsapp chat group with your mates or glued to Twitter, there are two words dominating many conversations this summer: Love Island.

The ITV2 reality TV show has grown a dedicated following with audience figures showing around 2.1 million tuning in to watch each episode.

For those who haven't seen it before, the show throws 13 singletons into a villa where they couple up in the hope a blossoming romance develops.

The public usually has the pick of who stays on the Love Island with the winning couple receiving a £50,000 prize.

Fans will know that if you get hooked then it is a major commitment in your life, with the show on every night of the week - including a weekly-round up of the best bits.

As Love Island reaches the half-way point of this series, here's a catch-up on some of the stand out moments so far.

What started out as a conversation about who pays on a date turned into a hot debate that ended a relationship before it had barely started.

By episode nine, contestant Camilla had been cracking on (that's Love Island code for flirting) with fellow islander Jonny and thought that they might have something special.

But then came the subject of feminism.

Speaking in the kitchen, Camilla argued that everyone who believes in equality should be a feminist and questioned whether her potential partner felt the same.

Jonny argued that "real feminists" believe in a "slope towards them, rather than towards men" and said "women almost have more opportunities".

Cue lots of tears from Camilla and then an awkward chat between the pair where they decided they were too different to form a lasting romance.

It sparked a big debate on Twitter about whether Camilla could class herself as a feminist while appearing on a TV show where the female contestants had to twerk to bag a date.

@LaceyvanderHarg wrote: "Feminism is having the choice to do what you want. Camilla (and the others) want to do it, so they can and it's their choice."

While Leanne Brady said: "Camilla, not sure the twerking & lap dance were showing a good example of feminism."

In what is a classic love triangle, contestant Olivia had to choose between two men, Mike and Chris, who were both vying for her affection.

It created one of the best one liners of the show when Chris branded his love rival "Muggy Mike" for choosing Olivia to couple up with.

Twitter was impressed and the phrase end up trending on the social media site.

That was the question on everyone's lips following a shock double elimination.

Let's set the scene. Dom and Jess had been coupled up from the beginning of the show and believed they were a "power couple".

But she was dumped from the island, alongside fellow contestant Mike, and insisted to Dom she would be "on the outside waiting" for him when he left.

Then came media headlines that Mike and Jess had spent the night together after being eliminated which was coupled with a cosy shot of them posing together on Instagram.

Meanwhile inside the villa, Dom was pining for Jess and indicating he would remain faithful to her during the remainder of the show.

Fans will have quickly discovered that rumours from the outside world have a habit of being revealed inside the villa.

In what was one of the most awkward moments of the series so far, it came down to contestant Marcel to break the news to his housemate that his love interest may have set her sights elsewhere.

A sun cream bottle was thrown, doors were slammed and the word "bruv" was used a lot.

Tissues at the ready. Episode 21 was an emotional rollercoaster for many fans who have grown to love contestant Camilla.

After a rocky start, Jonny and Camilla decided to rekindle their romance after putting their differences aside when it came to their feminism views. (Yep - a lot can change in a week).

There were plenty of shy glances and late-night kissing, with viewers desperately hoping that nice-girl Camilla had finally found "the one".

Then new girl Tyla walks in.

Ever the lady, Camilla gives her blessing for Jonny to pursue his new romance and he does just that - snogging Tyla a few minutes later.

While she may be the forgiving type, viewers definitely are not.

Laura Eagles wrote on Twitter: "I wonder if Jonny realises he's on par with Theresa May as one of the most disliked people in Britain right now."

Allana Hoggard said: "Camilla is a beautiful educated humanitaran bomb disposal expert and Jonny is a waste of space. Get him off my telly pronto"

Even last year's Love Island contestants waded into the drama.

With the show expected to last seven weeks, producers have thrown in a huge curveball to keep the drama hot and the viewers hooked.

In a Love Island first, the contestants' relationships will face their "ultimate test" when 11 new faces and a brand new villa are unveiled in Thursday's episode.

The Crazy Effects Energy Drinks Have on Your Body
Spider-Man star Hannibal Buress sends lookalike to...