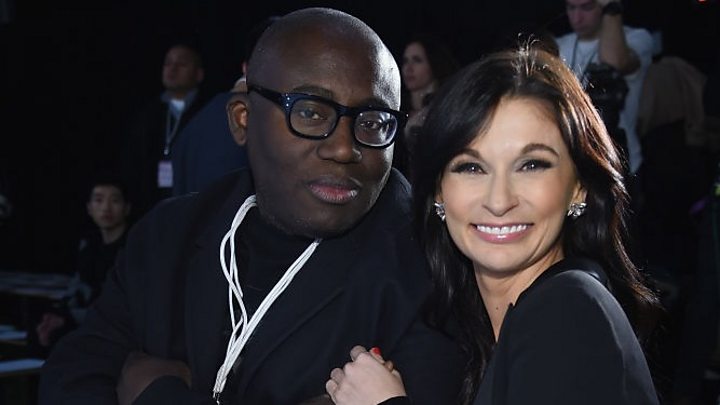 He's the first male editor in the magazine's history and takes over from Alexandra Shulman, who announced her departure in January.

She had spent 25 years in the role - a quarter of the magazine's lifetime.

The fashion world will be watching with interest to see what Enninful does as editor - his first move on Tuesday was to launch Vogue on Snapchat.

Here are some of the key areas he's likely to work on:

Vogue has been on our shelves for 100 years. The magazine retains a loyal readership - the average issue sells 186,000 copies in the UK.

But Colin Morrison, a media consultant who writes for Flashes & Flames, says that figure includes 26,000 "multiple copy sales", where copies are sold at a discounted price to be distributed in shops or airport lounges.

Given the huge changes to the print industry in recent years, Vogue's sales have arguably held up relatively well.

But the figures don't tell us anything about who is still buying the paper magazine - and many younger readers are likely to have migrated online.

Interestingly, the first thing Vogue announced on Tuesday as Enninful officially took the reins was that the magazine was joining Snapchat.

It suggests Enninful is well aware of one of Vogue's biggest challenges, which is what the magazine's digital presence might be in the future.

British Vogue sold 8,000 digital copies per month in the second half of last year - low compared with the physical sales.

The online landscape is of course very different to print, with young consumers so used to getting so much content for free.

Hannah Rochell, acting fashion editor at the London Evening Standard, says Vogue's online presence will likely get much stronger as it becomes more distinct from its paper counterpart.

"I think they have to make their online content really engaging and to offer something different to what you get in the physical magazine," she says.

"Video content in particular is a very exciting thing for fashion because you can do so many different things with it - so there's huge potential for their online presence to grow."

It's worth bearing in mind that Teen Vogue has been a huge success online, speaking in a totally different language to its parent publication.

3) Keeping its influence in an online world

In recent years, publications like Vogue have arguably been overtaken by platforms such as Instagram as the gatekeepers of the fashion industry.

Now, if a designer wants to reach the widest possible audience, Vogue is not necessarily the first platform they would choose.

Advertisers are more likely to try and get Rihanna or GiGi Hadid to be seen wearing their clothes or posting about them on Twitter and Instagram.

Similarly, vloggers and bloggers are now a regular fixture on the front rows of fashion shows - a symbol of their power and influence.

"I think the fashion industry is changing all the time in so many ways, and it has indeed moved on to celebrity and digital influencers," Rochell says.

"But the fashion industry is good at adapting and keeping up with that sort of trend, so we could well see a change in editorial tone at Vogue to reflect that."

Morrison says that while many traditional media outlets have found a way to make money from online content, advertisers now have far more platforms to choose from.

"Magazines are now quite big digitally, but a huge amount of online advertising now just goes straight to Facebook and Google, so that's the competition that isn't easy for traditional publishers to contend with," he says.

Enninful has already been busy making some changes at the top of Vogue in the last few months.

But perhaps even more interesting than who he's hired is who has departed - a number of senior figures have left the magazine since his appointment was announced.

In what The Times described as a "posh girl exodus", veterans such as Lucinda Chambers, Frances Bentley and Emily Sheffield all announced their departures.

It wasn't initially clear whether they had jumped or been pushed, but last month Chambers told Vestoj in no uncertain terms: "I didn't leave. I was fired."

Enninful himself has put a slightly different spin on it.

"I'm really excited to see my vision for the British Vogue team come to fruition," he said. "I'm very much looking forward to working with everyone on forthcoming issues."

As for how Vogue's new era could be reflected in its pages, Rochell thinks the signs point to a more diverse line-up of models and contributors.

"Diversity is something [Enninful] is very keen on championing, as we've seen in the past with his work, so I think that's definitely something that will be welcomed in the fashion industry as a whole," she says.

The industry has faced criticism recently for its lack of diversity, but many designers have been trying to improve.

The most recent New York Fashion Week attracted publicity for the inclusion of plus-size models and a hijab catwalk show in its line-up.

Rochell adds: "Alexandra Shulman did a great job as editor, but I think this is a very exciting change and I'm really looking forward to seeing what direction Edward takes things in."