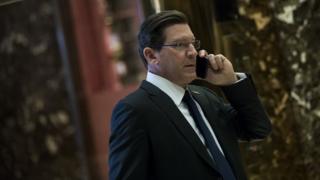 Eric Bolling is a long-time host at Fox News. US television network Fox News has suspended one of its presenters after he was accused of sending lewd photographs to three female co-workers.

Eric Bolling, a long-time host at the network, allegedly sent the messages on separate occasions several years ago.

His lawyer described the claims as "untrue and terribly unfair". Fox News said an investigation was under way.

"Eric Bolling has been suspended pending the results of an investigation, which is currently under way," a Fox News spokesperson said.

"We intend to fully co-operate with the investigation so that it can be concluded and Eric can return to work as quickly as possible."

Bill O'Reilly, who was dropped from the channel in April following reports that five women had received $13m (£10m) in payouts because of his behaviour. He denied the allegations Roger Ailes, who resigned as chairman of Fox News following several accusations of harassment by female employees, which he denied. He died in May