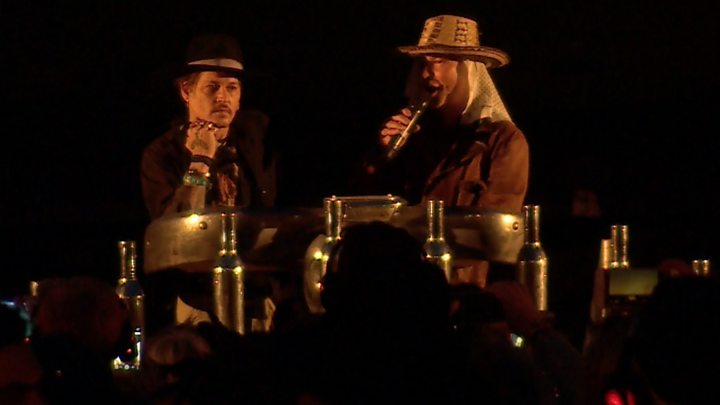 Johnny Depp: "When was the last time an actor assassinated a president?"

Actor Johnny Depp has apologised for remarks he made about US President Donald Trump in a speech at the Glastonbury Festival.

Depp told People magazine it was in "poor taste", did not "come out as intended" and was only meant to amuse.

Depp had asked the crowd: "When was the last time an actor assassinated a president?"

Trump supporters condemned the actor and the White House described his comments as "sad".

Depp's remarks on Thursday came as he introduced a screening of his film The Libertine at the festival in south-west England.

He asked: "Can you bring Trump here?"

After receiving jeers from the crowd, he added: "You misunderstand completely. When was the last time an actor assassinated a president?

"I want to clarify. I'm not an actor. I lie for a living [but] it's been a while. Maybe it's about time.

"I think he needs help and there are a lot of wonderful dark, dark places he could go."

The star acknowledged that his comments - which may have been a reference to the assassination of President Abraham Lincoln by actor John Wilkes Booth in 1865 - would prove controversial.

Depp said on Friday: "I apologise for the bad joke I attempted last night in poor taste about President Trump.

"It did not come out as intended, and I intended no malice. I was only trying to amuse, not to harm anyone."

After his initial comment, a White House statement on behalf of the president said it was "sad" that Depp had not followed Mr Trump's lead in condemning all violence.

"I hope that some of Mr Depp's colleagues will speak out against this type of rhetoric as strongly as they would if his comments were directed to a Democratic elected official," the statement read.

White House press secretary Sean Spicer echoed that on Friday, saying: "The president has made it clear that we should denounce violence in all of its forms and I think that if we're going to hold to that standard then we should agree that that standard should be universally called out."

Depp reappeared at Glastonbury on Friday, playing guitar on stage with Kris Kristofferson.

Depp is not the first US celebrity to allude to killing the president.

At a rally in Washington DC, Madonna said she thought "an awful lot about blowing up the White House" and the US rapper Snoop Dogg shot a toy gun at a Donald Trump character in a music video.

Fight Club podcast on talkSPORT 2: June 23, 2017
13 Amazing Life Hacks for Cleaning Everyone Should...