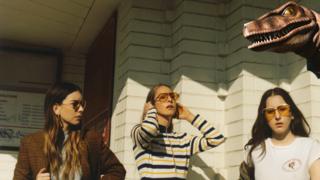 Image copyright Press/Getty Image caption Haim: "We put every ounce of love we had into this record"

It's taken Haim almost four years to follow up their chart-topping debut album, Days Are Gone, and there's one reason why: Dinosaurs.

"There was a time, when we first started writing this record," explains Este Haim, "where I was like, 'OK, why is every song I'm writing sounding like the theme from Jurassic Park?'"

"It's true!" chimes her younger sister, Alana. "We were like, 'Este, stop it! That's Jurassic Park. Again.'"

John Williams's majestic score has been lodged in Este's head since she was a child. Growing up in California's San Fernando Valley, the Universal Studios theme park was just two exits away from their house.

All three Haim sisters immediately launch into an a capella rendition of the famed dino-song, creasing up with laughter as they reach the climax. 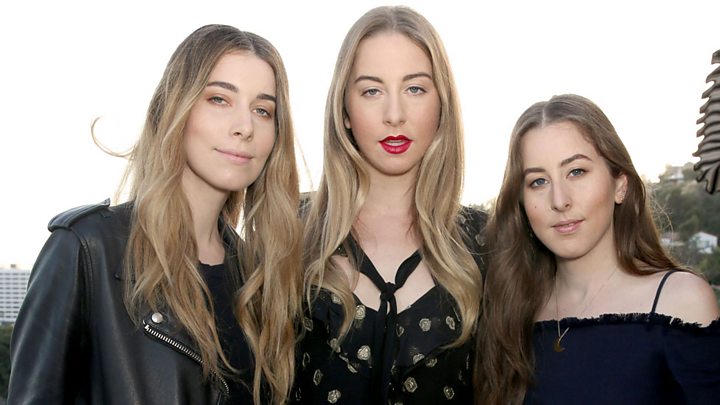 This is what interviewing Haim is like: Crazy conversational detours, sudden bursts of song, and hints of (affectionate) sibling rivalry.

"One time, Este cut my hair in the middle of the night without me knowing," alleges Danielle.

"I was not a Danielle fan when I was five," admits her elder sister.

They're thick as thieves now though - all cross-talk and in-jokes as they discuss their second album, Something To Tell You, "which is still so weird to say, 'cos I've been keeping it a secret for so long", marvels Alana.

Writing began two-and-a-half years ago in the living room of their parents' Los Angeles home - the same place they first learned to play, as part of a family covers band called Rockinhaim. ("We played a lot of dorky songs," says Alana. "A lot of Santana.")

The band had just come back from two years on the road. Along the way, they'd beaten Justin Timberlake to number one, supported Taylor Swift on tour, earned a Grammy nomination for best new artist, and collaborated with Calvin Harris and Primal Scream. Este even turned up on Adele's 25, playing the tambourine. 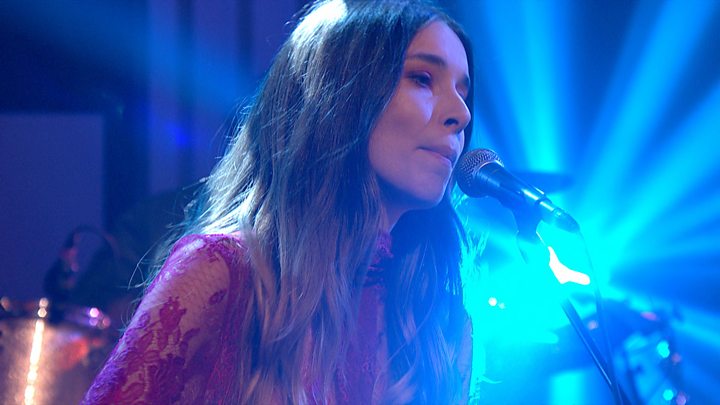 Media captionHaim perform Want You Back on Later… with Jools Holland

Understandably, it took a while to adjust to being back in their childhood home. Speaking to Rolling Stone last year, Haim said many of their new songs were about "trying to go back to your normal life, but realising there is a difference".

After a few false starts, and several Jurassic Park rip-offs, the band were given a "homework assignment" - writing a song for a feature film.

That allowed them to escape the pressure of following up their debut, and the band set about making a giddy pastiche of 1950s burger joint pop, called Little Of Your Love.

"We wanted to write a simple song with a I-IV-V chord progression," says Danielle, the middle Haim sister and main singer.

"I remember hearing these songs that came out in the early '80s that kind of had a Motown vibe but with '80s production. And I thought, 'Oh, I wonder what these songs would sound like now?'"

They loved it so much, in fact, that they decided to keep it for themselves. Eleven more songs swiftly followed, each marrying Haim's melodic West Coast rock to the choppy textures of R&B.

"We're very much inspired by drums," says Alana. "Drums are the first instrument we all learned how to play. So that's how every song on this record was born."

Image copyright Courtesy of Haim Image caption The band have been playing together since they were toddlers, but started to make music in earnest in 2012

Most of the songs were recorded live, the band facing each other as they played in a dusty old recording studio called Valentine.

"It just reopened last year and it turns out it was right down the street from the house we grew up in. We had no idea it existed [but] we went in and were like, 'Oh my gosh, it sounds amazing, let's record here.'"

It was a return to the band's beginnings, albeit on a more professional level.

"We spent the first five years of our band playing every single venue in LA, trying to get people to listen," says Danielle.

"But we had, like, zero dollars so every year we would go into a recording studio for one day and try to bang out five songs.

"We'd watched documentaries about Tom Petty and Fleetwood Mac and they would all be in a room together, jamming. We didn't understand they'd spent so much time doing it over and over again, making sure it sounded right. So our recordings always sounded bad.

"But after being on the road for four years, we were like, 'You know what? We've played together for four years. We're a proper band. Let's get back to the three of us, in a room, playing together, getting that take, and just really working hard to get the right sound.'"

You can see the band at work in the video for Right Now - the camera weaving around the sisters as they record one of the album's most sparse, atmospheric tracks. Filmed in one continuous shot, without overdubs, it allows you to hear the click as Alana steps on her guitar's distortion pedal and Este's footsteps as she crosses the floor to the drum kit for the song's climax.

It was shot by Oscar nominee Paul Thomas Anderson (There Will Be Blood, Magnolia, The Master), who asked to meet the band through a mutual friend a couple of years ago.

Having been passed his email address, Haim spent the best part of a day composing a message to the director.

"There was a lot of reading it back," says Danielle.

"Take a nap, have a cup of coffee, read it again," adds Alana. "Should I tell him where I live? Maybe not, I don't know. 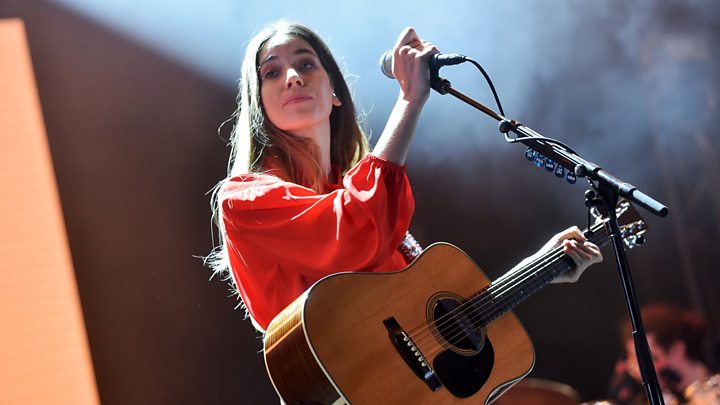 It was Anderson's idea to film the band "in situ", having noted a difference between their records and their raucous live shows.

"He said that he would see our little videos online, where we would be banging on a table and singing and snapping our fingers," says Danielle. "He was like, 'I love that you guys do that. I want to film you doing that in the studio and really get a sense of who you are.'"

By a stroke of luck, the film-maker turned up on the day Haim recorded the "perfect take" of Right Now. The version in the video forms the basis of the album track, with overdubs and harmonies added later.

But that was in November. Something To Tell You isn't coming out until July, and work continued right up to the wire.

Haim speak to the BBC on 24 May, the same day the album is mastered (the final stage of recording, where the sound balance is tweaked for consistency and clarity across the record as a whole). Prior to that, they send over rough mixes, with file names marked "vocals up" or "board mix".

The final version of Right Now is dated 5 May, two weeks after the video premiered on YouTube.

"I wouldn't say it's obsessive. I think we just really care"

But Alana admits that the band's... erm, "attention to detail" drove producer Ariel Rechtshaid to distraction.

"Once we turned in the record there was just a sigh of relief because he didn't have to deal with us being 'change this, change that' every five minutes.

"Ariel is now on his way to the Bahamas," says Este. "He needs so many vacations after this."

"I need 14 years of vacation!" jokes Alana, adopting the voice of her patience-worn producer. "I'm going to die 10 years early because of you guys!"

"But we put every ounce of love we had into this record and that's what we hope everyone hears."

Haim's new album, Something To Tell You, is released on 7 July by Polydor Records.

12 "Overheard" Stories Proving That Meeting the Pa...
7 of the Simplest Exercises for a Beautiful and At...