This morning in Paris, 20 queers woke up early to hang a banner on the Pont des Arts near the Palais du Louvre. At the same time, we released a detailed analysis in French and English of the new “asylum plan” recently presented by the French government.

We had planned this action for a while. We had painted a 15-meter long banner for two days in pink and purple with a little unicorn on the side, listened to our elders about safety recommendations and their old activists tips and had finally decided to act today, almost a week after the presentation of these new asylum policies and a few weeks after the new NGO reports and international condemnations concerning the violence against migrants in France.

I recognize that it may seem a bit difficult from an American perspective, confronted to by the orange political turmoil of Trump everyday, to understand why we would oppose strongly to Emmanuel Macron, our new president (and his government). Young, kind of handsome ― if you fancy that kind of jock-style politician ― fluent in English, and above all, very eager to give big speeches about humanitarianism, progress etc, Macron cultivates his Justin Trudeau’s style with much dedication.

Yet geographical distance blurs the complexity of reality. And behind the very rainbow, human-rights friendly closet that he has decided to hide in when confronted by the international community, another truth has to come out.

Considering the urgency of the refugee situation, we thought that it was time to do whatever we can to break the silence. Migrants are arriving in France everyday. If many of them are trying to seek asylum elsewhere, the difficulties they face to cross the sea once at the French borders, forces them to stay and deal with our current policies and the lack of real legal, social, medical coverage, as well as welcoming spaces staffed by trained workers, where they can assert their rights.

For years now, many migrants have been persecuted in France in Calais (near the French border close to England) and the rest of the country. Today, they are chased by the police in the forest to be prevented from sleeping. They are also being denied most of their fundamental rights. Water is being poisoned regularly by police gas, distribution of food to the most vulnerable women and children especially is being forbidden. Theses repeated attacks by the police and local representatives on migrants’ human dignity started happening in Paris too ― the city of lights, much beloved by tourists and the international LGBTQI community.

If I don’t talk about the situation of LGBTQI people in France now ― or the rise of LGBTphobia etc (there would be many things to say too) ― it is because we have decided as a group of allies to denounce a situation that is almost as inhumane as the persecutions of gay men in Chechnya we were so shocked about recently.

How easy it seemed then for our president to criticize his neighbor’s garden publicly in order to divert the gaze from his own. He was indeed very quick to lecture Vladimir Putin on the situation in Chechnya and to publicly claim he would welcome the persecuted gay refugees (although even today, gay organizations in charge of welcoming them are unable to say if more than two refugees are now safe on our soil).

A week or so after Parisian Pride, where our collective had already momentarily blocked the president’s party parade, the French government unveiled his new plan for the refugees. Behind the words, a bunch of unclear, non-budgeted propositions that are not even slightly answering the problems of the current crisis. But also a harsh reality, the one that some of you might be familiar with. It consists of more police, more evictions, more oppressions and more vulnerability. 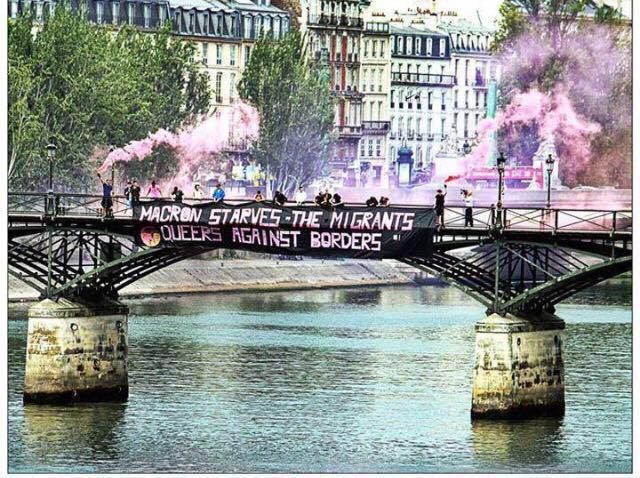 So, for a lot of us here, with summer here and loaded with parties and sometimes celebrations of the rights our queer ancestors gained by fighting so strongly, maybe it was time to remind ourselves not only how intricate and intersectional our identities are, but also how needed a collective alliance is. Today, as we were hanging this banner for ten minutes or so before the police came to us to remove it, we knew that we wanted to emphasize a necessary solidarity between our communities, whether we are LGBTQI or not, even if our oppressions and privileges are not equivalent.  Maybe I suffer here from a lack of perspectives concerning the American situation, but maybe you, queer Americans, can understand today how we cannot rest until everyone has been liberated from a global oppression.

'The Handmaid's Tale' Has Apparently Turned Elisab...
Jennifer Aniston Found The Pants Of Your Comfort-L...