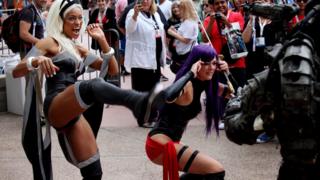 San Diego's Comic-Con International, happening this weekend, is an annual fiesta of costumes, comic books and celebrities that sits at the centre of a multi-billion dollar industry.

From a gathering of less than 300 people in 1970, the event has morphed into an annual, multi-day media bonanza that draws major corporate sponsors, movie studios and more than 150,000 people.

The event made more than $17m in revenue in 2015, according to the most recent tax filing available online, and it has spawned similar festivals in cities around the world.

Mr Miller went to San Diego for the first time in the early 1990s, when it still drew less than 40,000 people.

Now thousands of people flock to San Diego for the event even without tickets and the skyrocketing demand has led some to call for San Diego to expand its convention centre.

Eventbrite, a ticketing website, estimated that fandom conventions in North America grossed $600m in 2013. It said the wider economic impact could be as high as $5bn.

The San Diego convention centre estimates the annual July event generates some $140m in economic impact for the region.

Experts say the growth has been fuelled in part by a Hollywood that has mined comic books and science fiction for blockbusters, broadening the fan base.

Advances in special effects since 2000, when X-Men was released, have increased the success of movie adaptations, says Mr Miller. (Warner Bros. and Disney own the two major comic publishing outfits.)

The popularity of the events also coincides with a rise in spending on live entertainment, particularly among younger customers.

Some of the shift reflects a wealthier society with money to burn beyond basic needs, says Stephanie Tully, a marketing professor at University of Southern California's Marshall School of Business, who has researched consumer spending.

But she says there's an additional factor at play: Fear Of Missing Out - a phenomenon popularly dubbed FOMO - which has been exacerbated by social media.

"It's really difficult to substitute this year's comic con with next year's comic con," says Eesha Sharma, a professor at Dartmouth College's Tuck School of Business who worked with Ms Tully on a new study that shows people are more likely to go into debt to pay for experiences than material goods.

Companies have taken note of the phenomenon.

Disney is investing heavily in its theme parks and big investors such as TPG Capital, a private equity giant, have plunged money into troupes such as Cirque du Soleil.

"What I hear and what I see is that companies ... have a huge interest in live entertainment at the moment," says John Maatta, a former television executive who is now chief at Wizard World, which ran comic conventions in more than a dozen US cities last year.

Mr Maatta says he thinks people put more value on real-world interaction as more of our lives play out online.

"There's no substitute for human connection," he says.

Battle of the Cons

The growing circus at the San Diego festival, which unlike many others is run by a not-for-profit operation, has turned off some industry stalwarts.

Earlier this month, Mile High Comics, a major comics retailer, said it would not attend for the first time in more than 40 years. Other long time participants have started their own events.

David Glanzer, a spokesman for Comic-Con International: San Diego, did not respond to questions about its approach.

The group in 2014 filed a lawsuit against a smaller Salt Lake City event, alleging that the group had violated its trademark.

But for the most part, organizers have appeared content to let the fandom multiply.

ReedPOP, part of a London-based company, started the New York Comic Con in 2006 - it's expected to draw some 200,000 people this year - and now runs about 30 events globally in cities that include Shanghai, Mumbai and Sydney.

Event director Mike Armstrong says there's some room to grow in the US, and even more opportunity overseas.

"I'm very much of the mindset that rising waters will lift all ships," says Mr Armstrong. "I view smaller shows as feeder opportunities to get people excited and interested so they might one day want to attend New York Comic Con."

Earlier this year, Wizard World, which has scaled back the number of shows since 2015, warned investors it may not be able to continue in business. But Mr Maatta said the problem was temporary and didn't reflect the bigger market.

The firm has righted itself with new financing and announcements of additional conventions are coming, he says.

"The plan is just to intensify what we're doing," he says.

Are there clouds on the horizon?

Robert Salkowitz, the author of Comic-Con and the Business of Pop Culture, has followed the comic industry's rise since the 1990s.

"I always have my eye on how it could fall apart," he says.

Sales at comic book shops were flat in 2016 and have slipped this year, according to Comichron.

Image copyright Getty Images Image caption Comic book fandom: No longer a fad, for many it's a lifestyle

But Mr Marshall said that compares to banner performance in prior years. Comic sales at general audience book stores continue to grow and movies, such as Wonder Woman, still rake in millions at the box office.

A few flops might scare off the industry, but for now Mr Salkowitz says he thinks the market is healthy.