Israeli And Palestinian Teens Have Advice For Divided Americans

Israeli and Palestinian teens, who join together despite the region’s decades-old conflict, have some advice for Americans facing a deep political divide: talk with people you disagree with.

The YMCA Jerusalem Youth Chorus brings together Israeli and Palestinian teens to sing together and to discuss issues facing the region, as well as their own lives. Started five years ago by Micah Hendler, a Jewish-American, the chorus has around 30 students, about evenly split between Israelis and Palestinians. They come from schools in East and West Jerusalem, are Christian, Jewish and Muslim, and represent a range of political beliefs.

The group’s goal is to provide a space for young people to get to know their peers from other backgrounds ― who they might not otherwise meet due to the segregation of schools and in Israeli society in general. The group aims to lead by example ― for their local community and the world at large ― on how it can be possible, even in a deeply divided region, to “meet on an equal playing field and see one another’s humanity,” Hendler told HuffPost.

“I think there are definitely political divides now in the U.S. that can somewhat mirror those that we have here in Israel,” Shifra, a 19-year-old Jewish Israeli chorus member, told HuffPost by email (the teens only provided their first names). “Being in the chorus for five years, as much as it can be easy to refuse to speak with the other side, it is undeniable that you can’t make any progress when you have a one-sided struggle.”

“As much as it is easy to say the ‘other’ will not understand you … sitting down with someone and disagreeing with them and discussing it for hours until we see eye-to-eye and respect each other is what we did,” she said. “And it truly works.” 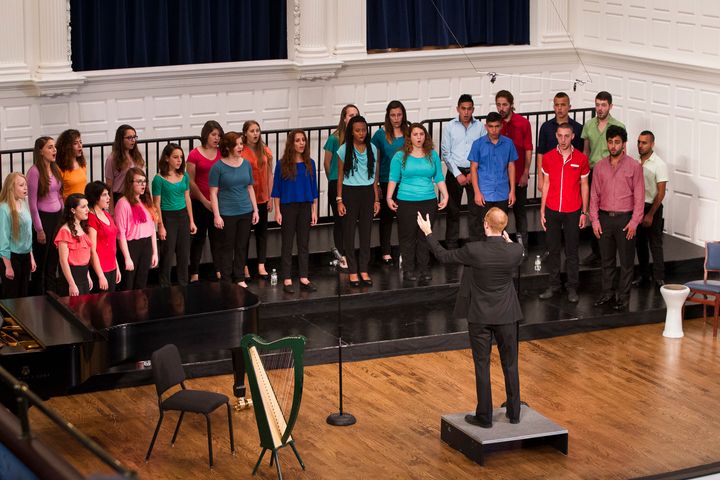 While the violent conflict between Israel and Palestine obviously doesn’t parallel the U.S. political divide, Hendler said that from his work with the chorus, he sees some useful lessons for Americans in how to engage with others they disagree with politically.

“One of the things that I noticed in the lead up to and after the [U.S.] election, as an American, was that I saw how similar the political discourse was getting to the one in Israel and Palestine,” said Hendler, a 2012 graduate of Yale University who was raised in Bethesda, Maryland.

“I saw there was an increasing dehumanization on both sides of ‘the other,’ an increasing sense that somehow truth is relative and not [just that] they disagree with me, but that we can’t even talk to them about it,” he said.

If there are even fundamental things most Americans agree on, but I can’t even talk to that person to find common ground, we’re really in trouble. Micah Hendler

In the United States over the past few decades, the divide between the Democratic and Republican parties has widened, with “partisan animus at an all-time high” today, one expert told the New York Times. Members of the two parties are more likely to say they dislike one another, and describe each other as threats to the nation.

In one stark illustration, a 2010 YouGov poll found that a third of Democrats and almost half of Republicans would be upset if their child married someone from the opposite political party. That’s up from 4 percent and 5 percent, respectively, in the 1960s.

“Turning into a partisan context where no one talks to anyone means even things that are shared become partisan,” Hendler said. “If there are even fundamental things most Americans agree on, but I can’t even talk to that person to find common ground, we’re really in trouble.”

As a national debate now rages in Congress on efforts to remake the U.S. health care system, several public figures have called on Americans to stop seeing the issue solely through a partisan prism.

“Our politics are divided. They have been for a long time. And while I know that division makes it difficult to listen to Americans with whom we disagree, that’s what we need to do today,” former President Barack Obama wrote in a June 22 Facebook post on the subject.

But calling for unity is easier than acting on it ― and the Jerusalem Chorus knows that all too well. During the past five years, its members have continued to come together despite divisive moments in the Israeli-Palestinian conflict, from terror attacks to cases of police brutality. The continued construction of new Israeli settlements have further fueled divisions.

“In the beginning, we [in the chorus] started as two separated groups, and each group won’t talk to the other group because of our differences,” Saleem, a 17-year-old Christian Palestinian who has been in the chorus for two years, told HuffPost by email. “But despite all of our differences we moved on and found something that both sides share: first humanity, and secondly our love to music. And these made us a close, big family despite our differences.”

Beyond grasping different opinions, dialogue also enables people to be just that ― people. We are more than just our opinions. chorus member Lilit

The key to overcoming tense political moments, according to Hendler, has been providing a space, with trained facilitators, for the students to discuss issues head on. For instance, after a particularly violent few weeks in 2014, the students, who were on summer break, called for a dialogue session to talk it out.

“One said ‘I can’t believe you wrote on Facebook that you hope rockets fall on their houses, that’s my cousin you’re talking about,’” Hendler remembered. “That’s the problem with social media, it distances us from what we say, the people we’re attacking. That’s why dialogue is important, it puts you face-to- face, and it changes the way you talk.”

After talking it out, the kids were able to air grievances and come to a mutual understanding ― even if not always full agreement ― before performing a concert together, Hendler said.

“I think there need to be more places, in the Middle East or the U.S, for people of opposing viewpoints to talk about stuff ― and not on Facebook,” he added. 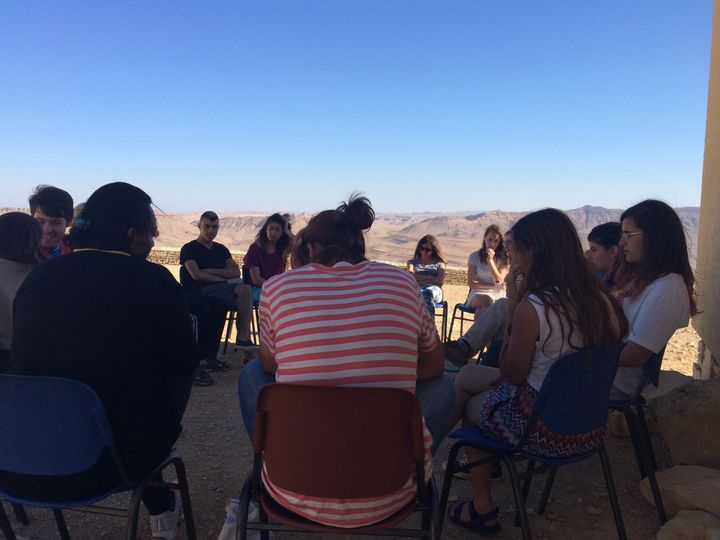 Calling for increased dialogue doesn’t preclude people from taking other routes to voice their opinions, such as political action, he said.

“That’s not to say resistance isn’t also called for,” Hendler said. “I think it’s important to do both: stand up for your beliefs, but not at the expense of somebody else’s humanity.”

Since the U.S. election, there have been many calls for people to simply talk to others across America’s political divide ― and critiques that such efforts shouldn’t put the burden on people from marginalized groups to do the work of convincing others who would deny their humanity.

I think it’s important to do both: stand up for your beliefs, but not at the expense of somebody else’s humanity. Micah Hendler

Hendler said such concerns and critiques are valid ― and that these conversations are not for everyone. But done right, he said he believes they can be transformative, for both parties.

Lilit, a 17-year-old Jewish Israeli in the chorus, told HuffPost by email that “the people from the ‘opposite side of the conflict’ are not necessarily Palestinians,” they are fellow Israelis who support “the occupation [of Palestinian territory], racists, and in general people with whom I have radical disagreements concerning political and social issues.”

“Personally, I understand right-wing people better when I actually talk and listen to them,” Lilit added. “Beyond grasping different opinions, dialogue also enables people to be just that ― people. We are more than just our opinions. Dialogue is not a debate ― it’s a conversation that makes us realize that at the end of the day, we are all human beings.”

From left: Shifra, Saleem, Lilit, Ala

Hendler said he has been thinking of adapting the chorus model to the United States to try to bridge ideological divides. For some of the students in the chorus, such efforts would be an easier endeavor than in Israel.

“I see in my personal perspective that it will be easy to change the division between left and right in America, because at the end of the day you are all Americans,” Ala, a 20-year-old Muslim Palestinian who’s been in the chorus for five years, told HuffPost by email.

Referring to himself as a “Palestinian under occupation,” he said he sees easing America’s political divide “as simple, as far as I’m concerned, but maybe for you it’s complicated.”

Hendler doesn’t think a Democratic-Republican chorus would solve America’s problems, of course ― after all, the Jerusalem chorus hasn’t solved the conflict in Israel. But that was never the goal. It was about expanding people’s worldview and understanding of “the other,” to show that a chance at peace and common ground exists.

“I don’t mean to come across like I have the solution ― I think I have something that would maybe help,” Hendler said. “If we can do this with Israelis and Palestinians, but we can’t even do this with Americans and Americans, then we’re really in trouble.”