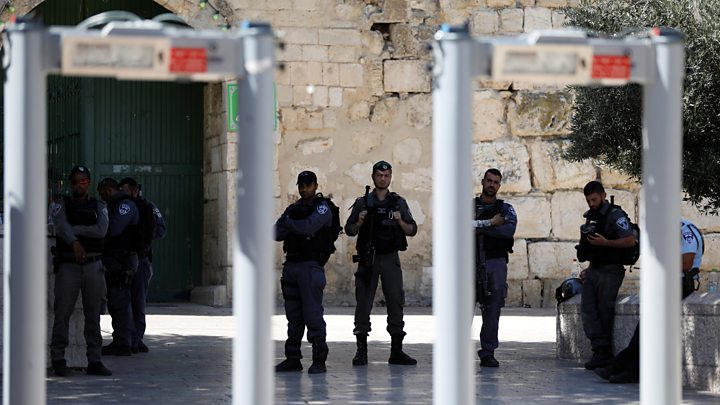 Jerusalem holy site security row explained. Israel has placed CCTV cameras at an entrance to a holy site in Jerusalem as tensions over security measures there continue.

It remains unclear if the metal detectors will be removed.

Tensions over the site, known to Muslims as Haram al-Sharif and to Jews as the Temple Mount, have surged in recent days, with further deaths.

Three Palestinians were killed in clashes with Israeli security forces on Friday as thousands protested in East Jerusalem and the occupied West Bank.

Later three Israeli civilians were stabbed to death at a Jewish settlement near Ramallah, in the West Bank, by a Palestinian attacker who entered a home.

Some Israeli ministers have suggested that the 19-year-old assailant responsible for Friday's knife attack should receive the death penalty, a sentencing option that remains available in Israel's military courts but has not been used since 1962.

The holy site in Jerusalem's Old City is home to the Al-Aqsa Mosque and the Dome of the Rock.

The Palestinians have strongly objected to the metal detectors being installed, seeing it as a move by Israel to assert more control over the sacred site.

Many Palestinians have prayed in the streets instead of going through the metal detectors.

Palestinian officials are yet to react to the installation of the security cameras. There has been speculation that they are meant to replace the metal detectors, but Israeli security sources have been quoted as saying that is not the case.

"They will remain. The murderers will never tell us how to search the murderers," regional development minister Tzachi Hanegbi told Army Radio.

But public security minister Gilad Erdan has said that the metal detector checks for all Muslims could eventually be replaced with different measures, including more police officers and security cameras with facial recognition technology.

The Muslim authorities overseeing the Al-Aqsa mosque say they reject any change to the status quo.

On Sunday, the Arab League - a regional association of countries - said Israel was "playing with fire" and that "no Arab or Muslim will accept violations" against holy sites in Jerusalem.

Israel says the three Israeli Arabs involved in the 14 July shooting near the compound were able to smuggle guns inside and that the new security measures are needed to stop similar attacks.

Police chased the attackers into the site afterwards and shot them dead.

Pope Francis, speaking to pilgrims in Vatican City's St Peter's Square on Sunday, said he was "following with trepidation the grave tension and violence of recent days in Jerusalem" and called for moderation and dialogue.

The UN Security Council will discuss the crisis on Monday.

'Star Trek' Actor Going Boldly Into On-Camera Gay ...
Man, 20, dies after being chased by police into a ...