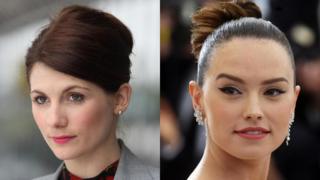 "I want to tell the fans not to be scared of my gender," she said. "This is a really exciting time."

It is an exciting time and not just for Jodie - female leads have been cropping up with increasing regularity on the big and small screens.

And sci-fi and superhero films have been leading the way.

Recently, Wonder Woman was credited for inspiring a new generation of girls, by teaching them they can save the world, too.

And in the Star Wars universe Rey, played by Daisy Ridley, and Jyn Erso, played by Felicity Jones, also proved that male-dominated franchises could be reinvented for the modern day with women taking a leading role.

Game of Thrones and The Hunger Games have also portrayed women as strong leaders, rather than being relegated to the sidelines as minor characters.

And A Wrinkle in Time, starring Mindy Kaling as a character called Mrs Who, will be out next year. The 2018 American sci-fi film is directed by Ava DuVernay and written by Jennifer Lee.

The novel it was based on also has a woman behind it - Madeleine L'Engle.

"Casting a woman in a part that's always traditionally been played by a man is hugely important," Morgan Jeffery, Digital Spy's TV editor, tells the BBC regarding Doctor Who.

"This is the age of The Hunger Games; of the Star Wars movies being fronted by a female lead; of Wonder Woman utterly demolishing its box office rivals.

"By casting its first female lead in 2017, Doctor Who gets to be a part of something - something hugely exciting - instead of being left behind."

Will Howells, who writes for the Doctor Who magazine, feels the decision shouldn't be considered a big deal.

"Fifty years ago the idea of changing the lead actor in Doctor Who was groundbreaking.

"In 2017 there shouldn't be anything major about a TV series changing from a male lead to a female one.

"We'll also maybe see a solo male companion as a regular feature for the first time. I don't think it's a risky choice at all but if a show that can go anywhere and do anything can't take risks, what can? This opens so many potential new dynamics for the shows."

"It's not just that you can do whatever, it's that you should do whatever. We should not allow our prejudices to colour our imaginations.

"We need more female directors, more female writers. It shouldn't be enough that we have one white woman in the leading role. That doesn't mean we shouldn't consider female companions. Bill was great last series, not just a woman of colour but a gay woman. We need representation across the board."

She believes the decision to choose a female Doctor is seismic.

"Doctor Who is one of the great legacy titles that we have in our culture… so it makes a big statement to have a female Doctor," she says.

"Leaving aside diversity of casting being a good thing in itself, it's great because if you tell the same story with someone of a different race or gender, it feels different. It's an absolute shortcut to making yourself seem more imaginative.

"I'm thrilled about it."

Hollywood actor Zoe Saldana, who stars in three sci-fi franchises - Avatar, Star Trek and Guardians of the Galaxy - says she's attracted to the genre because of the freedom it offers.

"It makes me feel superhuman because, obviously, it's been brought to my attention continuously since I was born that I'm not a conventional person because of the colour of my skin or my gender or my cultural background," she told the Daily Telegraph in a recent interview.

"So I think science fiction has given me the ability as an artist to be colour-blind, and gender-blind, and to imagine and reinvent myself and be the chameleon actors are supposed to be."

O'Hara also points out that leading women are selling big at the box office - and film companies aren't there to address gender equality, they're there to make a profit.

"Something like Wonder Woman shows that if you do put the money in and the push behind them, they will absolutely make money. In the US now, 51% of cinema-goers are female.

"Even for supposed male films, the first Guardians of the Galaxy movie, a superhero and a sci-fi film, [the audience] was something like 47% female. We like these films and we want to see ourselves reflected in them."

But while there has been a lot of positive reaction to the Doctor Who news, for some it is a bridge too far.

It's bad news for those wanting to turn the clock back, though - or at least stop it going forward - because the genie is well and truly out of the bottle.

While there seems to have been a push for female talent in 2017, the presence of strong women in sci-fi is actually nothing new.

Think Princess Leia in Star Wars, Dana Scully in The X-Files, and of course the groundbreaking Ellen Ripley, played by Sigourney Weaver, in the Alien films.

Not to mention Kate Mulgrew - now starring in Orange is the New Black - as Captain Janeway in the Star Trek: Voyager TV series.

And it's 20 years - yes, 20 - since Buffy Summers from Buffy the Vampire Slayer was first hailed as a feminist icon.

Long before Doctor Who writers had thought of it, Ron Moore changed the gender of the character Starbuck when he launched the re-boot of Battlestar Galactica in 2003.

The original was played by Dirk Benedict in the 1978 series. Moore cast Katee Sackhoff, who just happened to tweet "Fantastic!" when she heard the Jodie Whittaker news.

And now the decision to cast a woman as Doctor Who has led to some speculation on which other roles could be filled by women.

The producers of the James Bond films have just announced they are to make a "female-driven" thriller starring Gossip Girl's Blake Lively, so could that mean changes for the Bond franchise itself?

While the Doctor is an alien, so technically has no gender, there are some who are concerned at the prospect of James Bond being a woman - a vacancy that will be going when Daniel Craig leaves the role.

The names being associated with the franchise so far include non-white actors - as well as a handful of women - meaning that change could be on the way for that franchise, too.