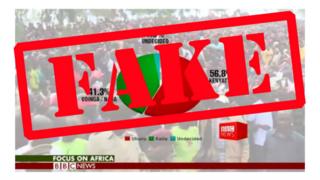 A report was made to look as though it was produced by the BBC Focus on Africa programme. A fake news report about Kenya's election that is made to look as if it is from broadcaster CNN has been circulating on social media.

It comes after a fake video imitating the BBC's Focus on Africa programme was also distributed on Friday.

Both videos had bogus surveys showing President Uhuru Kenyatta well ahead in polls ahead of August's election.

In fact, recent opinion polls suggest neither he nor rival Raila Odinga have enough support to win outright.

A recent survey suggested that 90% of Kenyans had seen or heard false news in the run-up to the poll.

CNN has taken to Twitter to confirm that the video report is fake, while the BBC has urged people to verify any stories claiming to be from the broadcaster by visiting the BBC website.

The fake CNN report cuts from a CNN Philippines broadcast to a fake video that uses CNN logo. However, the font used in the headlines is visibly different from the one used by the broadcaster.

A Portland/GeoPoll survey found that many Kenyans feel some news items about the elections have been deliberately misleading.

It also found that while traditional media remained the most trusted source of information, large numbers of people got their news from Facebook and WhatsApp. 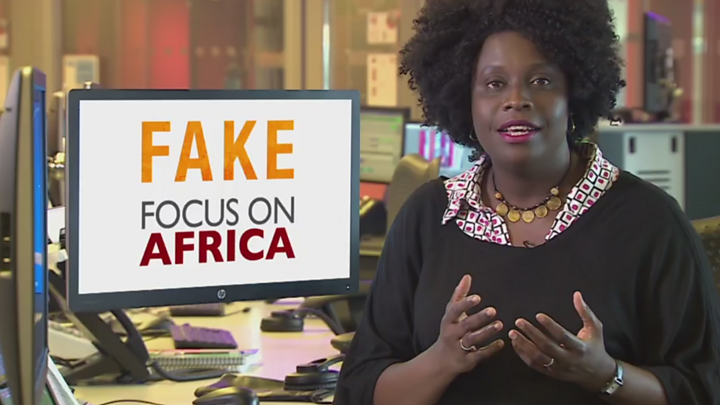 To win outright, a candidate must get 50% of votes cast plus one vote, as well as at least 25% of votes in half of Kenya's 47 counties. If no-one achieves that, the election will go to a run-off.

Recent polls have provided conflicting data on whether Mr Kenyatta or Mr Odinga is ahead. However, the polls suggested support for both of the candidates is below 50%.

Eight things about the Kenyan elections

What Kenya's chaotic primaries tell us about August election

While Kenya's 2013 elections passed relatively peacefully, there was serious post-election violence following the 2007 polls, which left over 1,000 people dead and 600,000 displaced from their homes.

However, experts say they do not expect to see the same level of conflict following August's elections.