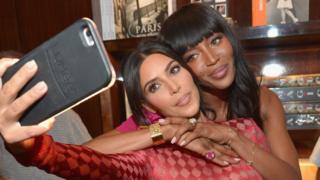 Kim Kardashian West's company is being sued over a selfie case.

The LuMee smartphone case, which is promoted by Kimisaprincess Inc, comes with an integrated light to help users take the perfect selfie.

But now a man called Hooshmand Harooni has claimed in a $100m (£75m) lawsuit that the idea was copied from him.

He says he patented an "integrated lighting accessory and case for a mobile phone device" in 2013, which he licensed to a company called Snaplight.

Mr Harooni's patent infringement lawsuit reportedly claims Snaplight's profits have suffered as a result of the LuMee case and Kardashian's promotion of it.

Kardashian receives a cut of LuMee's profits, according to the court documents.

In a statement, Snaplight's founder Bardia Rahim said LuMee "created doubt in our technological and operational integrity" by launching the product.

"It's illegal to try and monopolise the market, but more than that, it's un-American to do it when you're being deceptive and unethical the entire time," he added.

A representative for Kardashian said: "The patent lawsuit filed by Snaplight has no merit and is just another attempted shakedown. Kim has done absolutely nothing wrong."