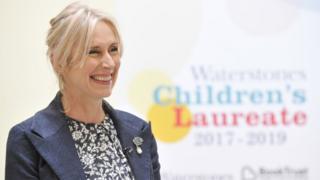 Boys don't like reading books that have girls as the main characters - and that "makes it harder for girls to be equal", says the new Children's Laureate Lauren Child.

Child, who wrote the Charlie and Lola and Clarice Bean series, was speaking after her appointment was announced in Hull.

She is the 10th person to be the official champion of children's books.

Child will hold the title for two years and takes over from Chris Riddell.

'Do you write for boys?'

While girls are happier to read about boys, she is worried about why most boys are more reluctant to read books or watch films about girls.

"I don't know if it's just in our culture, or whether it's a boy thing, that they find it very hard to pick up a book or go to a film if a girl is the central character," she told BBC News.

"I don't know where that comes from but it worries me because it makes it harder for girls to be equal."

Sales figures back up the notion that books with girls as main characters are less popular than those about boys, she said.

Child has just published the last Ruby Redfort book. Ruby began as a character in her Clarice Bean series, but Child decided to give the fictional spy her own spin-offs after getting "a lot of letters from girls - and some from boys".

She said: "You could quite easily change Ruby's name to a boy's name and just changing a few details in the book and it would work just the same.

"But still parents will come up to me and say, 'Do you write books for boys as well?' This is a book for boys. We do still have those problems. It does concern me."

What does the Children's Laureate do?

The Children's Laureate role is intended to "promote and encourage children's interest in books, reading and writing".

But what have others actually done with the position?

Another problem is the fact there are so few Asian and black children on the covers of picture books and on screen, she said.

"They're not present enough. And if they don't feel they're represented in a book, or a film, or a TV programme, then how can they feel an equal part of society?

"That really is important. I see it more and more because I have a daughter adopted from Mongolia and we're watching all kinds of programmes and the characters are mainly white Caucasian.

"It's that look - it's very often long blonde hair, blue eyes. She's not seeing herself. And very often, if you do see a child, it's about an issue. It's not about just being a child."

Child was appointed Waterstones Children's Laureate at a ceremony in Hull, which is UK City of Culture 2017.

The Laureate is chosen by a panel of judges from the book world, who also consider names put forward by children who can vote online.

The author said she wanted to use the position to "shine a light on children's books and illustration", which she said is always seen as "a poor relation" to adult literature.

Tributes at Ronnie Corbett Westminster Abbey memor...
Having Flat Feet Can Destroy Your Knees — Do These...