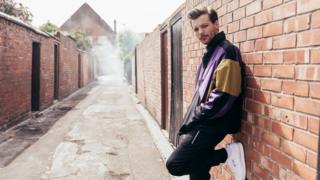 Emerging from a boyband is a tricky business but, so far at least, the One Direction team has made a pretty good fist of it.

So where does that leave Louis Tomlinson?

He was always the underappreciated one - a quiet, benign presence in the world's biggest band.

Speaking to The Observer last month, the 25-year-old acknowledged he was seen by some as "forgettable, to a certain degree".

What he contributed, though, was songwriting - receiving credits on more One Direction songs than any of his bandmates.

Appropriately for a former singer in a Green Day tribute act, he was the one who pushed the idea that a pop band could have guitar riffs.

He might not have been directly responsible for sampling The Who's Baba O'Reilly in Best Song Ever, but it certainly fitted his vision for the band.

"Little things like that were really important to me," he tells the BBC. "It was amazing that we were able to combine the two - absolute pop with guitar music."

When One Direction went on hiatus in 2015, Tomlinson admits he went a bit wild - making up for the teenage party years he lost to fame.

"It wasn't really me but I embraced it at the time," he says, looking back.

The star dipped his toes back into the pop world last December, appearing as a guest vocalist on Steve Aoki's single, Just Hold On.

But just as it was released, Tomlinson's mother died. Johannah Deakin, who had been diagnosed with leukaemia at the start of 2016, was only 43 years old.

They had been unusually close - she was the first person he told when he lost his virginity - and her death hit him particularly hard.

Nonetheless, Tomlinson went ahead with a planned X Factor performance of Just Hold On that week (partly at her request), finding solace in people's reaction.

"I don't like to talk about it much, but I will say I've never had anything like it in my life," he says.

"It felt like the support went deeper than the fans - like people across the nation had my back. That was really nice. My mum would have loved that, definitely."

Since that performance, Tomlinson has been hard at work in the studio and, on Friday, releases his first solo single Back To You.

A duet with US pop singer Bebe Rexha, it's a brooding pop concoction about returning to a relationship that "stresses me out".

The 25-year-old told the BBC how the song came about, what it felt like to leave One Direction, and how the Arctic Monkeys' lyrics influenced his debut album.

We're speaking 12 hours before your single comes out. How do you feel?

I'm nervous - but less than I was three weeks ago. I've got a lot of good feedback from people at the record label and radio stations - but all that does really is ramp up the pressure because you're hoping what they say is true.

And now you'll find out whether they were lying all along.

I will finally know. Exactly!

I was curious to find out why your first solo single starts with Bebe Rexha, singing the entire first verse.

We recorded a version where I sang first - but you've got to do what's best by the song.

With the emotion she gives it, and the way she opens up the song, it always had to be her, really.

The lyrics are pretty gritty. Do you think that might surprise people?

My whole mission with this album is to not write these Hollywood-esque songs that talk about some unfathomable crazy love story. I'm so bored of that.

Because I'm from up north, I grew up loving the likes of the Arctic Monkeys and Oasis. And the way they tell stories is such an effortless thing. It's real, it's honest and it's to the point, you know?

Now, any of the Arctic Monkeys would be devastated to hear me talking like this, but there is a way of incorporating that conversational honesty into pop.

So what have you been writing about on the album?

There's one song I'm really attached to called Just Like You, which is all about this view of celebrities that we're impenetrable and almost not human, but fundamentally we all have the same problems.

Heartbreak feels the same, loss feels the same, all these feelings are the same for all of us. Mine just look a load different to, maybe, Tom who works in the chippy from nine to five.

I noticed that all the artwork was shot in Doncaster.

Well, we did the video for Back To You in Doncaster, which was amazing. I mean, I'm just the biggest advocate of Doncaster in the world, I'd say.

OK then, sell Doncaster to me in two lines…

If you're not from there it's difficult to explain - but if you wanted to completely embrace a fully fun working class night out, then you go to Doncaster.

What did Bebe Rexha make of the city?

She was great. She thought it was cool. I did hear her team ask for sushi at lunch, which struck me as naive in Doncaster.

Did you not take her for a curry chip?

I didn't but I really should have! There's a great chippy round the corner from where we filmed, as well.

Your last performance with One Direction was on the X Factor in 2015. Did you wake up the next morning thinking: "I'm free!"?

Oh no - it was a very emotional time. It was a really weird feeling, because [the break] is by no means definitive, so it leaves you in a place where you're like, "OK, what comes next?"

What did you get offered? Film work, modelling contracts, presenting?

I'm not very good at fashion but there were a few TV opportunities. But unless you are someone like Harry - who is immensely talented in so many different areas - I think it's really important to stay in your lane and do what you do well.

Having said that, the idea of acting sounds quite exciting to me. The idea of playing the ultimate rough chavvy - it's like me being everyone I always wanted to be in Doncaster!

But I'd rather get the music 100% right, rather than 90% right while trying to dip my toe in something else.

What are your plans for the album?

Ideally it's coming at the end of this year, but I don't want to put myself under too many time constraints and end up in a position where I have to put two fillers on it.

How many songs have you written altogether?

Have you got them all on a phone somewhere?

Yeah! There's a couple of songs that me and my girlfriend [fashion blogger Eleanor Calder] really like that'll never be used for anything, so they're kind of just for us. That's really nice.

Are they ones you've written for her?

A lot of the album's about her, really. I wanted to make the album feel chronological, because that's how I wrote it.

You can hear my journey as an individual over these three years - leaving the band, then going out on to the really crazy party scene, and then I've kind of ended up full circle back with Eleanor, who I love dearly.

Not many people put that much thought into an album these days. It's usually just a collection of potential singles.

Then a lot of people are missing a point.

Like I said to my best mate, Olly, I want there to be songs on the album that I could play to your mum, and she could listen to it and take something away from it. Maybe she doesn't love the song, but lyrically she'll understand something about me.

This is something that - for me, anyway - it doesn't feel like we have enough of. A lot of artists use words because they sound nice, or because it works for the science of the song.

I think, especially with being lucky enough to have a big fanbase, I want to say to them, "Look, lyrics actually matter, and I want to show you why".

Louis Tomlinson's single, Back To You, is out now on Syco Music

Why experts question Dali paternity claim
Why three isn't a crowd: Meet the trio who 'marrie...