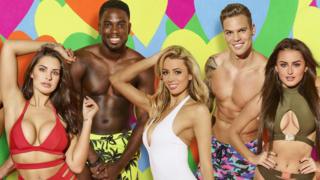 But that's what 13 "sexy singletons" are hoping to do on Love Island, which has just begun its third series on ITV2.

If you've never seen it before, the premise is to couple up and convince the public to keep you on the island in order to win £50,000 - all while trying to find your perfect match.

Think Big Brother but with board shorts, bikinis and more under-the-sheets shenanigans than you can shake a stick at, as the couples chop and change throughout the series.

If you have seen it before, it's likely to be one of your guilty pleasure programmes you've agreed to dedicate the next seven weeks of your life to. Or you may throw it in your trash TV basket.

You may remember Love Island in its previous life as Celebrity Love Island, which ran from 2005-06 and featured the likes of Jayne Middlemiss, Callum Best and Strictly Come Dancing's Brendan Cole trying to find love.

It was revived two years ago with average Joes taking part and was met with relatively modest success, watched by an average of 595,000 people - but still a hit for ITV2.

Last year it exploded, with an average of 1.4 million fans tuning in daily to watch. The show became must-see viewing amongst mainly female (67.4%) viewers and under 35s (63.6%).

Scheduled against Channel 5's Big Brother, about 1.2 million people are currently tuning into the sunny island escapes in Mallorca - 200,000 more than those watching the action in rainy Borehamwood.

So what's all the fuss about?

Who are the contestants?

Predominantly aged 20-23 - with the oldest a positively ancient 31 - this year's contestants have clearly been cast for today's social media and millennial audience.

They all have very active Instagram pages (which was likely a pre-requisite to appear), but here are a few that stand out.

Executive assistant Chloe, 22, says she's come on the programme "looking for the love of my life".

If you're a fan of Noughties pop you might recognise Marcel, who used to be in Blazin' Squad - but more on him later.

Oil rig worker Sam, 21, introduced himself by saying: "I pull birds for a living."

But don't think it's all glamour models and wannabe celebrities - 27-year-old Camilla works in explosive ordnance disposal, going into countries after conflicts and getting rid of landmines so they don't injure civilians. Oh, and she apparently dated Prince Harry.

The Twitter commentary that accompanies each episode is of epic proportions, which gives viewers all the more reason to watch it live to be part of the conversation.

#LoveIsland trended every night in its first week, with viewers keen to share their views on the villa's antics.

The first episode was full of memes on how Marcel was trying to keep his Blazin' Squad past a secret, but then told a bunch of his housemates. Unfortunately as the group's first hit was in 2002 and most of the contestants are in their early 20s, Marcel's claim to fame was met with mostly tumbleweed.

After the third episode there was a lot of debate over whether Camilla was too "boring" because she failed to kiss or fall in love with anyone in the first 48 hours.

Viewers this year will be hoping for a similar sort of scandal that last year's series produced.

Miss Great Britain Zara Holland lost her crown after scenes showing her performing a sex act with a fellow contestant were screened.

Miss GB organisers said they couldn't promote her "as a positive role model moving forward", adding she "simply did not uphold the responsibility expected of the title".

But it all happened without the model knowing as she was in the villa without access to the outside world. A week later she quit the show after her mother fell ill.

The show attracted further controversy after it broadcast islanders Emma-Jane Woodham and Terry Walsh having sex 10 minutes after the watershed.

Seven people complained to Ofcom, but the watchdog cleared ITV2, saying the broadcaster had given viewers enough warning.

Like most reality TV shows these days, contestants hope their appearance will be a launch pad for other things.

Series one's Jon Clark and series 2 winners Cara De La Hoyde and Nathan Massey (pictured above) have appeared in The Only Way Is Essex, and fellow series contestant Rykard Jenkins moved on to Ibiza Weekender. First series hopeful Josh Ritchie went on to star in Ex On the Beach.

But there have been other more lucrative successes - last year's runner-up Olivia Buckland launched her own clothing range earlier this year.

She also secured a number of endorsement deals with her Love Island partner, Alex Bowen, including Christmas pudding flavoured condoms.

And they do find love

Yes they do apparently, although most haven't.

Despite promising to stay together forever on the show, Cara and Nathan managed to last a year before splitting up in April. Last month Cara announced she was pregnant with Nathan's baby, but they would not be reuniting.

More happily, Olivia and Alex announced their engagement after a New Year's Eve proposal and are set to get married next summer.

And there has also been the first Love Island baby this year - after 2016 contestants Cally Jane Beech and Luis Morrison welcomed baby Vienna in May.