Marvel: Everything it unleashed at Comic-Con 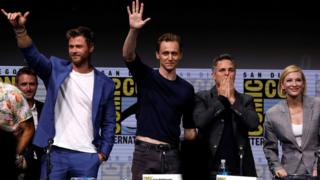 The Marvel panel at Comic-Con is traditionally one of the biggest events of the convention and this year was no exception. Despite a lot of news coming out of Disney's D23 last week, the studio still saved some of the big guns for San Diego.

Fans were sent into meltdown as they were bombarded with announcements and sneak peeks during the 90-minute session, as stars across the Marvel universe attended to support their films.

Here's everything that was revealed.

Michelle Pfeiffer will play Wasp in Ant-Man and The Wasp

Captain Marvel will be set in the 1990s, before Iron Man

Image copyright Twitter/Jim Phan Image caption Fans tweeted the concept art for Captain Marvel and the Skrulls shown in Hall H Brie Larson's film - the first Marvel movie to be focused around a female lead - will be set before Iron Man in the Marvel timeline. Samuel L Jackson will reprise his role as Nick Fury and will have two eyes as it takes place before he loses one and adopts his famous eye patch. The villains in the film will be The Skrull - green alien shape-shifters.

Image copyright Getty Images Image caption #BromanceGoals Hulk is going to talk in actual sentences! Mark Ruffalo explained Bruce Banner has been the Hulk for two years after the green giant refuses to turn back. Cate Blanchett, who plays villain Hela, revealed she had been "happily dragged" into the Marvel universe "because of my kids". Jeff Goldblum confirmed his character, the Grandmaster, is the brother of Benicio del Toro's Marvel universe character universe The Collector, as seen in Guardians of the Galaxy and Thor: The Dark World. A new trailer was unveiled giving a closer look at Hela, the first look at Bruce Banner, lots of explosions and featuring some of the more comedy moments from the film.

Image copyright Reuters/Marvel A new poster for Marvel's first black superhero to be brought to the big screen was unveiled. New footage was also played, showing a fierce battle in a casino, receiving a standing ovation. Director Ryan Coolger revealed the origin of his love for the hero: "I wanted to find a comic book character who looks like me. The shop owner gave me Black Panther."

After fans at D23 were given the chance to see the first footage from the highly anticipated film which sees every Marvel superhero unite on screen, 6,000 Comic-Con fans were given the same luxury.

Unfortunately Marvel are still keeping it a closely guarded secret so it hasn't been put online anywhere yet - much to the annoyance of fans not in San Diego. But the reaction from the crowd suggests something close to Beatlemania.

It's likely we'll have to wait until November when Thor: Ragnarok is released before the rest of the world will see it.

CONFIRMED: A 'Wonder Woman' Sequel Is On Its Way
Judge not, lest thou be judged