Me and my scar: It took me 45 years to love my body 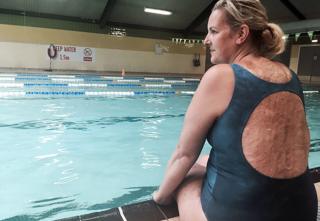 Sylvia Mac has spent most of her life trying to conceal the extensive scars which cover her body - the legacy of a childhood accident. Here she explains why, at the age of 48, she decided it was time to stop hiding and come out into the open.

There's not actually any part of my body apart from my face that is normal.

My burns start from the top of my neck all the way down to the top of my bottom, and then around the front of my stomach and down my left leg. And then on the rest of my body I've got lots of little pinprick holes all down my arms and my legs from where they took skin.

I was very badly burned when I was three years old, suffering third- and fourth-degree burns.

My mum was boiling water in saucepans for our bath. She would pour the water into bowls and she put the bowls on the bathroom floor.

We were just playing around, me and my siblings, and I ran into the bathroom and shut the door. We were told not to go in there. I went in there and my sister pushed the door, and that's when I fell backwards into the bowl of boiling water, causing very bad burns.

There was pandemonium in the house, screaming… I went into shock and was having fits. Then the ambulance arrived.

They gathered my family together and told them that I wasn't going to make it through the night.

I remember always being in pain

They baptised me and I had my last rites.

My first recollection was lying in the hospital bed wrapped in bandages from underneath my arms down to my hips. I remember always being in pain.

Whenever I visited the hospital I would have to undress from top to toe and stand on a bed and turn around so that they could inspect my back and the rest of my body, with all the student nurses looking at me. I had nightmares over it.

When I was growing up a lot of people used to tell my mum, "Oh, she's beautiful, she's pretty."

But in my head I always thought, "Why are they saying, 'You're pretty'? I'm not. Underneath my clothes I'm burned."

I always felt ugly, so it's affected me mentally as well as physically.

Children would call me different names like "witch" and "snakeskin", and they were really nasty. I was told that I would never have boyfriends, never get married, never have children. Showing my back was always going to be a negative thing.

Hear Sylvia Mac talking to Ena Miller on Woman's Hour on Tuesday 15 August 2017 at 10:00 on BBC Radio 4 Or catch up later on the BBC iPlayer

I loved swimming - once I was in the water I was in a different world, it was great - but I was terrified about people seeing my body. When everybody got out of the water I'd wait until they went to change and be the last one to sneak out.

There was a particular teacher at secondary school, our PE teacher, who decided that we were all going to have showers at the end of the lesson. We all had to queue up with our towels around us.

As I got to her, I was pleading with her, "Please, please, I can't shower, there's no way I can shower," and she just pulled off my towel and pushed me into the shower. Having everybody look at me was awful, I just felt like everyone was laughing at me.

Eventually my dad wanted me to join the local swimming club. I don't know if he did it in the hope that it would help me open up and meet people, but actually it was quite damaging.

I never actually won a race just because of the thought of everybody having to look at me if I did come first.

I'd dance with guys and they'd be rubbing their hands up my back and they'd whisper in my ear, 'Oh, that's really nice, you're wearing a basque'

Having my picture taken was always something I avoided - even school photos - so it's difficult to find pictures of me as a youngster. And sometimes I'd get a bit paranoid that people might be taking photos of me even if they weren't.

I couldn't go through many things in life, I couldn't sit exams, I couldn't go to job interviews because I just had no confidence and had low self-esteem, and I didn't realise why I was so down and so depressed.

It was almost like I was encased in a shell and I couldn't get out, and people never really listened to me.

In my teenage years there were times when I thought, "I'm going to step in front of that bus and just finish my life."

I can't look back now and say it was my mother's fault. But there were times when I took it out on her.

I got to a point where I was attacking everybody around me and it was the only way that I could deal with my emotions. I'd literally call people up, like my sisters, and be really nasty to them, a really vile, nasty, horrible person.

Relationships were very difficult. When I used to go out clubbing with my friends, I'd dance with guys and they'd be rubbing their hands up my back and they'd whisper in my ear, "Oh, that's really nice, you're wearing a basque or a corset."

They could feel the burns, they were like ropes - they still are today. And I'd just walk away. 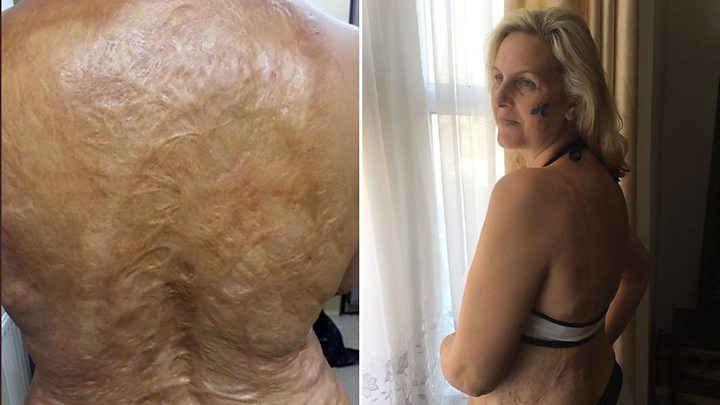 Eventually I met a really lovely guy and we just got talking all night. I explained to him about my burns because I felt so comfortable, he was a really good friend. He said he didn't have any problem with it, and that I was still beautiful. I was in love straight away because he accepted me. It just felt right. I've gone on to have three children with him and a grandchild.

Last year I was on holiday with my mum. We were at the pool, it was quite busy and the sun beds were close together. I had a bikini on. We were sitting down and I noticed the guy behind us pointing his phone towards me so I decided to get up. He moved his phone to follow me and every time I moved he followed me with his phone, so I knew then he was recording me.

It was really upsetting me so I said to my mum, "This is horrible, I want to get out of here."

It's like taking off a coat and saying, 'This is me'

I saw my mum sitting on the sun lounger and she had her head down, and I remember just seeing her so sad, it was quite upsetting actually. I realised that what I've gone through has affected her as well.

I had always noticed her looking at my burns. I wanted to say something to her - to say, "It's OK, I'm OK."

At that moment something just clicked in my brain and I decided that I was going to draw a line and make her happy. I took my dress off and I walked down to the edge. People were looking at me and I looked at my mum and I smiled, and I went, "Mum! Look! Look at me!"

And she started to smile. I put my hands on my hips and I started to pose on the water's edge and she was so happy.

I think that moment on the beach was just a turning point where I realised that no counselling, nothing on Google, was going to help me. It was time for me to help myself.

I went out and bought a swimming costume - it had a big hole in the back - and then I set up my swimming classes. I invite people with disfigurements to come and swim. When I'm in the water and I'm swimming I just feel at peace, I feel calm, and I can think of lots of wonderful things.

I also started a website, Love Disfigure, and became active on social media to raise awareness and show support for those living with a disfigurement. It may comfort people to know there are others out there going through the same thing.

I talk to a lot of people that have been burned, too. There are youngsters who want to kill themselves when they've just been burned, and I try to tell them, "Look, I've got all the way through my life and you can do this too."

It's been such a long journey. It's like taking off a coat and saying, "This is me now, and I don't care what people think." I've noticed a big change in my life and I've been able to accept the way I look.

My message to people with disfigurement is to just go for it, do whatever you want to do in life. Don't let anything stop you or stand in your way.

Sylvia Mac speaks to Ena Miller about coming to terms with her scars on Woman's Hour on BBC Radio 4 on Tuesday 15 August 2017 at 10:00 or catch up later on the BBC iPlayer