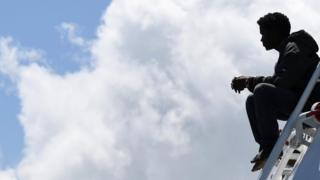 Close to 100,000 migrants have crossed the Mediterranean to Italy so far this year

The head of the self-styled Libyan National Army (LNA) has vowed to repel any Italian ships approaching Libya's waters without permission.

On Wednesday, Italy's parliament approved a plan to send naval boats to Libya to stop migrants crossing the Mediterranean Sea.

Italy is the main recipient of migrants making the dangerous trip from Libya.

While the LNA said it would repel "any naval vessel that enters national waters without permission from the army", it did not specify whether it would be ready to use force.

Libya's eastern-based government said Italy wanted to "export the illegal immigration crisis from its territory to Libya's", adding that the return of tens of thousands of migrants would have a "dangerous impact" on Libya's security, economy and society.

It said the actions of Italian ships in Libyan waters were "a violation of sovereignty".

Meanwhile the competing UN-backed government will co-operate in all operations and must give permission for any Italian ship to deploy off Libya.

Italy will initially deploy two ships, in what the government says is an operation to help the Libyan coastguard and target people smugglers.

The Italian Defence Minister Roberta Pinotti said there would be "no harm done or slight given to Libyan sovereignty", and stressed the mission would not be a "blockade" preventing migrant boats from leaving.

However, rights groups have warned that those sent back to Libya face abuse at the hands of traffickers.

More than 94,000 migrants have crossed the Mediterranean to Italy so far this year, according to the UN - a record number. More than 2,370 have died trying to reach Italy.

Arrivals in July though were down dramatically on the same month last year - 11,193 compared with 23,552, according to the Interior Ministry.

Migrants picked up in Libyan coastal waters - and not international waters - can be legally returned to Libya, but aid workers say conditions in migrant reception camps there are dire.

A note on terminology: The BBC uses the term migrant to refer to all people on the move who have yet to complete the legal process of claiming asylum. This group includes people fleeing war-torn countries such as Syria, who are likely to be granted refugee status, as well as people who are seeking jobs and better lives, who governments are likely to rule are economic migrants.