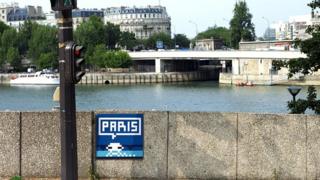 Thieves posing as city workers appear to have stripped Paris's walls of some of its best-loved street art in a matter of days.

The suspects have taken "more than a dozen pieces" of the mosaic artworks by French urban artist Invader, a Paris City Council spokeswoman said.

The city was alerted to the thefts after people got in touch to complain about their removal.

The tiled pieces are inspired by the 1978 video game Space Invaders.

Paris council said it "quickly realised that those were not our agents, nor our vehicles or our jackets".

As they were disguised as city workers, Paris "has decided to file a complaint for abuse of functions", the spokeswoman said.

Parisians lamented the removal of the mosaics on social media.

Invader, whose real name, like that of fellow street artist Banksy, is not known, has previously pointed out: "Given the type of tiles I use, to steal the work is impossible. These individuals by removing the mosaics destroy the piece and then have to buy ceramics to repair or recreate the work."

However, the work does sell for high prices when he creates replicas, garnering hundreds of thousands of dollars at auction.

In a 2013 interview with the BBC, he said his work was influenced by his childhood.

"Space Invaders represents to me a symbol of the beginning of the digital world in which we are living now."

11 Food Items You Would Never Buy Once You Know Wh...
Little Girl's First Interaction With A Sanitary Pa...