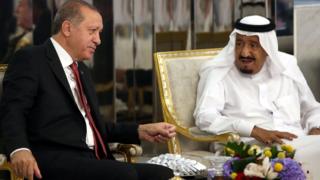 President Erdogan held talks with Saudi King Salman bin Abdulaziz al-Saud after arriving in Jeddah. Turkish President Recep Tayyip Erdogan has said it is not in anyone's interest to prolong a crisis between Qatar and its neighbours, as he embarked on a two-day visit to the region.

Mr Erdogan is in Saudi Arabia and will also visit Kuwait and then Qatar as he tries to resolve the dispute.

In June, Saudi Arabia, the United Arab Emirates, Bahrain and Egypt cut ties with Qatar over its alleged support for terrorism and ties with Iran.

A boycott put in place by the four countries has forced the gas-rich emirate to import food by sea and air to meet the basic needs of its 2.7 million population.

"No-one has any interest in prolonging this crisis any more," Mr Erdogan told reporters before leaving Istanbul airport.

He accused unspecified "enemies" of trying to "fire up tensions between brothers", AFP news agency reported.

Turkey has a military base in Qatar and sees it as a key ally in the region.

Both countries share a similar attitude towards Iran - Saudi Arabia's regional rival - acknowledging it as a key player in the Middle East and trying to maintain good ties.

However, correspondents say Mr Erdogan is keen not to antagonise Saudi Arabia.

He has referred to the kingdom as the "elder statesman" in the Gulf and said it has "a big role to play" in ending the crisis.

The influence of President Erdogan in resolving the tension between Qatar and its neighbours will be limited as he has taken a firmly pro-Qatari position since the start of the crisis.

Turkey does more trade with the Saudi-led anti-Qatar block than with Qatar. However, Qatari investment in Turkey has strategically targeted businessmen close to Mr Erdogan.

His ideological affinity with the Muslim Brotherhood is cited as another reason for him to side with Qatar.

Mr Erdogan may also receive support from anti-American factions within the Turkish military for his pro-Qatari stance - seen as another step in which Turkey is moving away from American influence.

Turkey can look to exploit the Qatar crisis economically, but the country's regional political influence will further diminish if it loses a number of potential allies in the Syria crisis and rivalry with Iran.

On Friday Qatar's Emir Sheikh Tamim bin Hamad al-Thani said he was ready for talks to end the crisis but insisted that the emirate's sovereignty must be respected.

The four Arab states initially made a list of 13 demands that included shutting down the Al Jazeera news network, closing the Turkish military base, cutting ties with the Muslim Brotherhood and downgrading relations with Iran.

They later backed down, saying they wanted Qatar to accept six broad principles including commitments to combat terrorism and extremism, and to end what they called acts of provocation and incitement.

Qatar has acknowledged providing assistance to Islamist groups designated as terrorist organisations by some of its neighbours, notably the Muslim Brotherhood. But it has denied aiding jihadist groups linked to al-Qaeda or Islamic State (IS).