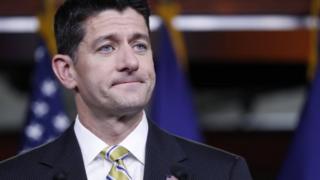 Republican House Speaker Paul Ryan has said he is "disappointed and frustrated" by the Senate's failure to repeal the Obama-era healthcare act.

He is among several lawmakers to express frustration after three Republican senators opposed a bill to scale back parts of the US health law.

The so-called "skinny" repeal is the Senate's third failed attempt to roll back Obamacare.

It is considered a blow to Republicans who vowed for years to repeal the law.

The legislation fell apart during the early hours on Friday, when Arizona Senator John McCain cast the decisive vote to reject the bill by 51 to 49 in the Republican-dominated Senate.

He joined Senators Lisa Murkowski and Susan Collins in opposing the plan.

An estimate from the non-partisan Congressional Budget Office (CBO) found the "skinny" repeal would have resulted in 16 million people losing their health insurance by 2026, with insurance premiums increasing by 20%.

What has Republican reaction been?

Mr Ryan said Republicans "should not give up" on the plan, but added that he would now turn his attention to overhauling the tax code.

He continued: "It's time to move on." 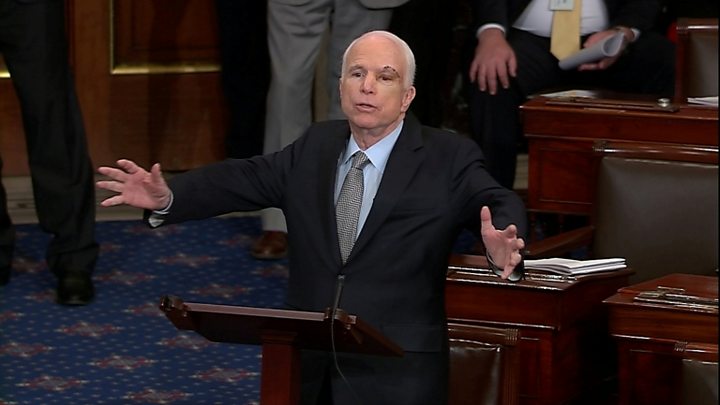 Alabama Congressman Mo Brooks blamed Mr McConnell for the failure, telling CNN "the leadership at the top is responsible. The buck stops there".

Mr Brooks added that Mr McConnell should pressure the Senate to pass a new version of former President Barack Obama's signature law - the Affordable Care act - or step down.

Iowa Congressman singled out Mrs Murkowski and Mr McCain for the loss.

He said Mrs Murkowski "was initially appointed to her position by her father" and that her write-in campaign in 2010 "was essentially a revolt" against Republican primary voters.

Mrs Murkowski was elected to her fourth term last year. 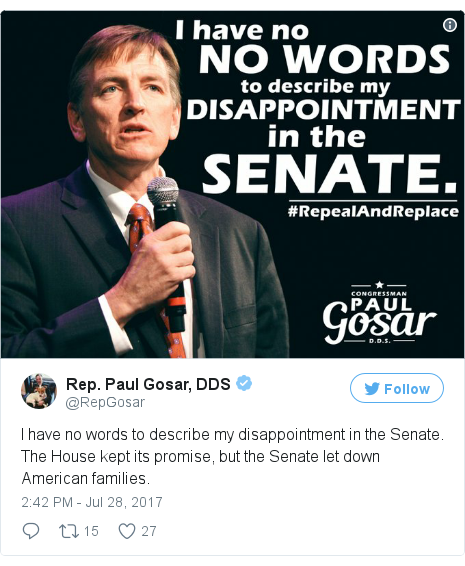 Texas Senator John Cornyn tweeted it was up to Democrats now to protect Americans from a market collapse.

Iowa Senator Joni Ernst tweeted she was "disappointed" the Senate could not repeal the "flawed law" while Georgia Senator David Perdue blamed "an unworkable budget process and politicians who put their political self-interests ahead of national interest".

"The American people should be outraged and should demand real change now," he said in a statement. "It is extremely important that we get this fixed."

What have other people said?

President Trump lamented the failed vote during a speech at Suffolk County Community College in New York on Friday afternoon, but added "you can't have everything".

He told the crowd he said from the beginning to "let Obamacare implode" first and then repeal it.

"I turned out to be right," he added.

A spokesman for Mr Obama weighed in on the debate on Friday, praising those who "mobilised, organised and made their voices heard".

"President Obama still believes that it is possible for Congress to demonstrate the necessary bipartisanship and political courage to keep delivering on the promise of quality, affordable health insurance for Americans," Kevin Lewis said in a statement. 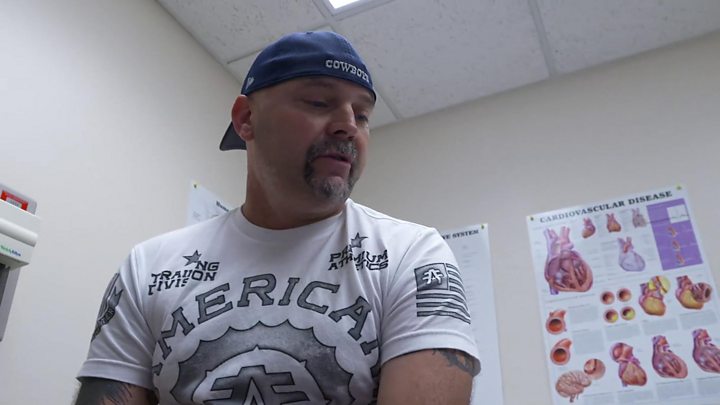 Media caption'Trump not thinking about the little people'

"I have not seen a senator who speaks truth to power as strongly as well as frequently as John McCain," he said at a news conference on Friday.

He also called Mrs Collins and Mrs Murkowksi tough women and said he spoke to Speaker Ryan on Friday about working on bipartisan legislation.

Is Trump partly to blame?

Instead of beating the drum for healthcare reform, the administration has been all over the map.

A hastily announced ban on transgender individuals in the armed forces, issued by presidential tweet. A press conference to herald efforts to combat gang violence. A campaign-style rally in Ohio with a focus on the threats of illegal immigration. A speech to a Boy Scouts gathering that was heavy on media bashing.

In case that wasn't enough, over the past week the administration has been beset by internecine warfare. Mr Trump publicly questioned the effectiveness of his former campaign confidant, Attorney General Jeff Sessions, subjecting him to an increasingly angry barrage of tweets.

What was the 'skinny repeal'?

The bill - officially known as the Health Care Freedom Act - would have eliminated parts of Obamacare, including the individual mandate requiring all Americans to have health insurance coverage or pay a fine, and the employer mandate, which requires the same of companies with 50 employees or more.

It also would have temporarily repealed a tax on medical devices, defund the US women's group Planned Parenthood for a year and provide more money to community health centres, as well as given states more flexibility in complying with Obamacare regulations.

But the pared-down measure would have left much of Obamacare untouched, including the expansion of Medicaid, a government health programme for the poor that faced deep cuts in earlier proposals.

A requirement that all insurance plans cover essential health benefits, federal subsidies to help consumers pay for insurance as well as taxes on wealthy Americans also would have remained in place.

The stripped down bill came after earlier Senate defeats for proposals to replace Obamacare and then to partially repeal it.

Mr McCain said he had voted against the skinny repeal because it did not amount to meaningful reform and would not have improved care for Americans.

What now for Obamacare?

There are not thought to be any further plans for a new bill to repeal Obamacare because the skinny repeal was seen as the only measure Republicans could get through Congress.

However, lawmakers could revive the issue and take it up later in the year.

Following the vote, President Trump tweeted: "As I said from the beginning, let ObamaCare implode, then deal."

Mr Trump's position on healthcare reform has varied - he has spoken out at various points for Obamacare being repealed, repealed and replaced, or being allowed to collapse by itself. 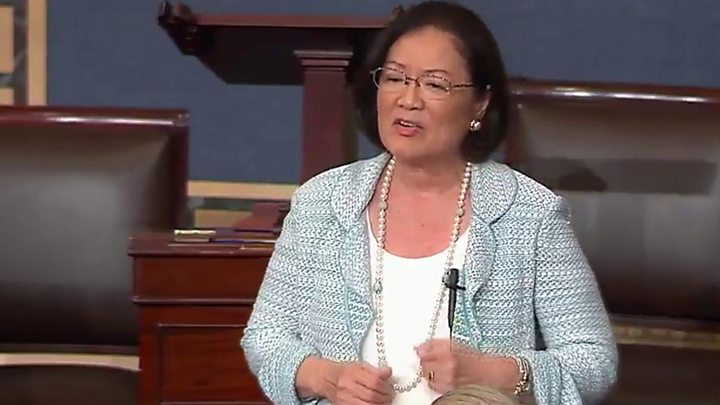 In his statement, Mr McCain said Obamacare was in a state of "collapse", with healthcare premiums "skyrocketing" and providers "fleeing the marketplace".

He criticised the way Obamacare had been passed by Democrats using their Obama-era majority and called for senators to "return to the correct way of legislating" with input from both parties.

"We must do the hard work our citizens expect of us and deserve," he said.

But Texas Senator Ted Cruz insisted the fight was not over.

"Mark my words, this journey is not yet done," he said.

Drake’s Sprite-Sipping Stalker At It Again
Hey, Amber Rose, Check It Out — 10 Other Hot Celeb...