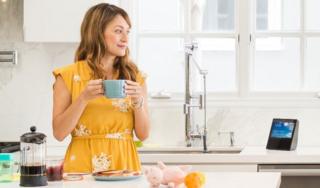 The recently released Echo Show is the range's first to include a screen Amazon's range of smart speakers and their artificial intelligence assistant Alexa have proved to be a huge sales hit.

But the product is still a shadow of what the man in charge - Dave Limp - and indeed their owners, hope it will become.

"We have thousands of engineers inside Amazon adding to [its] capability every day and then another tens of thousands of developers adding to the skills," he tells the BBC.

"The thing I am sure of is that this time next year she will be significantly more intelligent than she is now, and that sometime in the future we will hit our goal of reinventing the Star Trek computer."

It's a lofty goal, especially since any attempt to go beyond commanding a weather update or asking for the lights to be switched on is currently asking for trouble.

Try to have anything close to a normal conversation with Alexa and it tells you it doesn't understand or cannot help.

But though it may not always be obvious, the firm says rapid progress is being made.

"One [feature] that we've rolled out relatively recently here in the UK is she can start answering follow-up questions," Mr Limp gives as an example of behind-the-scenes work being done.

"So, she understands some simple kind of pronouns.

"You could ask, 'What's the weather here in London?' and then do a follow-up question, 'What's the population there?'

"And she'll know the context was London."

He also draws attention to the fact that Alexa recently crossed the 15,000 "skills" threshold - its name for voice-controlled apps.

That figure sounds all the more impressive when you consider its nearest rival, Google Home, has fewer than 400.

One consultancy calculated that Amazon's skill count is currently growing at 37 times the rate of the search giant's.

But the question is how many of the programs are truly useful.

For all the promise of compelling new ways to control home appliances or on-demand news updates from major media brands, there seem to be a mountain of apps dedicated to delivering "fun facts", gags, wacky noises and a vast range of ambient sounds.

Or as one study suggested earlier this year, a whopping 97% of voice skills are left unused after just one week of being installed.

"I guess I would not agree with the thesis that some of the skills are not sticky - many of them are," says Mr Limp when challenged about quality.

"You never know which one of those Cat Facts is going to turn into the next big thing. There are many examples of that out there.

"Consumers will choose the ones they find most useful and the cream will rise the top. But I would tell you, there is a lot of cream now."

Arguably, what fuelled the creation of quality apps for smartphones was allowing their developers to sell them and build in ads.

Without that, it's hard to see how the mobile versions of Minecraft or Facebook would have prospered.

But for now, at least, Amazon does not allow either opportunity.

"There are already people who are monetising in some ways," Mr Limp points out.

"Some of the smart home applications have subscription services. Spotify [has] a premium tier.

"But with any new medium, and you mentioned smartphones, in the early days there was also no clear way to monetise - but eventually you find a path.

"What I'm not sure is will it be the same as what we've seen on other platforms."

Amazon may currently dominate the smart speaker market but it's getting more crowded.

Alternatives powered by Apple's Siri and Microsoft's Cortana go on sale later this year. In China, there's already a plethora of such devices, with Alibaba and Xiaomi the latest to unveil models. And if news reports are to be believed, Samsung and Facebook could be next in line.

Many market watchers agree, however, that Amazon has one advantage over much of the competition: its online store.

The firm currently sells Echo devices for roughly what it costs to produce them, and its ultimate goal is for owners to use them to buy more stuff.

"The early response is that customers certainly resonate with the ability to reorder things," Mr Limp says when asked whether customers are proving willing.

Image copyright Getty Images Image caption Other manufacturers are also building Alexa into their products, including a fridge made by LG

"So, reusables and consumables are things that are showing sort of early promise.

"But again it's just beginning, and as we like to say at Amazon, we're kind of at day one and we have a lot to learn."

The company recently expanded the Echo family with two new models, one with a built-in screen, the other - still in test phase - designed to make recommendations about what you should wear based on owners modelling two outfits in front of its cameras.

"The ability to have a machine-learning algorithm distinguish through Style Check which outfit is better to wear at that particular moment, is just mind-boggling," Mr Limp suggests.

"It's informed by human beings but the algorithms are coming along quite nicely - I'm very optimistic that this is a problem that can be completely solved by machine learning."

For now, it's fair to say that many owners still get most use out of their Echos by using them to play music.

Amazon already supports some third-party streaming services in addition to its own, but not the market's second most popular, Apple Music.

So, if Apple knocked on the door, would Amazon allow it in?

"It would be something we would consider," Mr Limp says.

"Obviously it would come down to what it meant on behalf of customers, but certainly we would look at it."