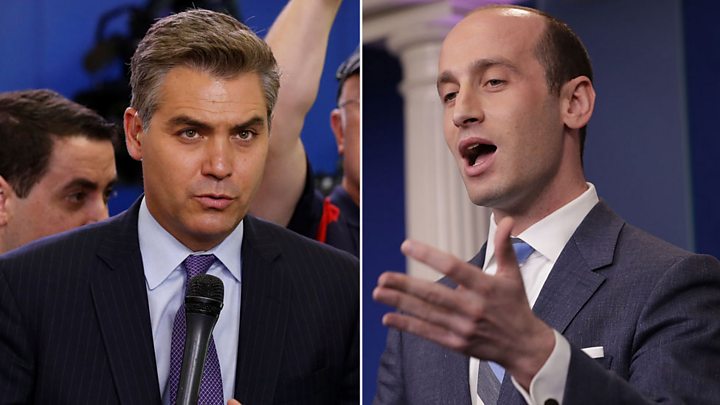 Stephen Miller called Jim Acosta's statement "insulting, ignorant and foolish". The Statue of Liberty was the focus of a monumental exchange between a White House adviser and a reporter after Donald Trump backed an immigration policy favouring the better-educated.

"The Statue of Liberty says, 'Give me your tired, your poor, your huddled masses yearning to breathe free'," CNN's Jim Acosta told Stephen Miller.

"It doesn't say anything about speaking English," Mr Acosta added.

Mr Miller said the poem on the iconic American statue was "added later".

The immigration overhaul, backed by Mr Trump on Wednesday, would curb the number of permanent, legal migrants allowed in the US each year and prioritise those who can speak English or are highly skilled.

Mr Trump's senior policy adviser at the White House, Mr Miller, said at a press briefing that the policy was "compassionate".

The question-and-answer session turned into a fiery row as Mr Miller and Mr Acosta clashed on the issue.

The pair verbally sparred over the Statue of Liberty as a symbol of freedom and what it represents in relation to US immigration policy.

In response to Mr Acosta's point about the famous poem, Mr Miller countered by saying that it was "not actually part of the original Statue of Liberty".

"The poem that you're referring to was added later," he told Mr Acosta.

But Mr Acosta, visibly unsatisfied with this response, used the daily briefing to accuse the Trump administration of "trying to engineer the racial and ethnic flow and people into this country".

Mr Miller said the accusation was "outrageous", describing the policy as "pro-American immigration reform" that enjoyed "immense" support among the public.

"Jim, that is one of the most outrageous, insulting, ignorant and foolish things you have ever said," Mr Miller said, adding: "The notion that you think this is a racist bill is so wrong and so insulting."

Mr Miller said the bill, which also proposes to limit family-based migration to spouses and children, was a step towards realising the administration's plan to introduce an Australian-style, points-based immigration system.

The bill still has a long way to go before becoming law and would be likely to face resistance in Congress from members of both parties.

It is not the first time that Mr Acosta has raised hackles at the White House. In January he was warned by then incoming press secretary Sean Spicer that he would be banned from future press conferences if he continued to "argue" with Mr Trump.